Dispatch & drivers have an integral role. Learn what dispatch does here!

Stories abound about dispatchers: one of the favourites is:

Truck driver gets pulled over by the DOT.

DOT says what is he hauling?

i.e.  dispatchers are not very bright because the truck is empty.

However, despite the jokes abound and drivers usually not understanding the role of dispatch, dispatch and drivers have an integral relationship and the role the dispatchers play in a truck drivers lives is integral to his or her success.

"We Bought the Truck"

This mostly applies to regional and long-haul truck drivers; a little bit to bus drivers, but not really.

Most of the schedule takes care of anything that's going to happen with bus drivers and whatnot.

Story - driving truck pulled into Edmonton - had a load going back to Vancouver.

Dispatch says to me, "oh we have a small pallet to put on the back of the truck, and we'll put that on there and they'll just pull it off when you get to where you're going to go."

"You'll get your full load and then they'll put it back on at the end."

The pallet was - you know less than two feet square and probably about 10 inches high.

They stuck it on the back of the truck.

Went down to the place to pick up.

They weighed me because it was a load of recycled paper.

And I backed into the door and opened the doors.

Guy looks in - he disappears.

He's got kind one eye that's kind of squirrelly.

We have the whole load."

I said to him, "just take it off and stick it over there and when you're done put it back on."

"No we bought the truck, you can't have that on there."

In this case it's not the truck drivers job to decide what to do.

You have to call dispatch and dispatch gets paid enough that they're going to make the decision about that.

In the end, what happened was is that he was adamant that we were not gonna be able to put that pallet back on.

so dispatch sent another truck out.

We put the pallet on the other truck.

We drove down the road, cut the seals off my trailer, stuck the pallet back on the full load and I carried on the Vancouver.

So in instances like that, where things go sideways you have to call dispatch.

First and foremost, truck drivers what is your role? Your role is to move freight, services and sometimes people, but not very much - freight and services between point "A" and point "B" as quickly as possible.

Now how do you do that?

You do that by working with dispatch and dispatch's role is to match available loads with available equipment and drivers.

And usually those drivers and loads have to be in the same geographical vicinity of where you are going to be when you're empty.

The role of dispatch is to match available freight with available trucks and drivers in their fleet.

So dispatch are always working to try and keep things going.

And it's important for truck drivers to keep in mind that you must communicate effectively with dispatch. 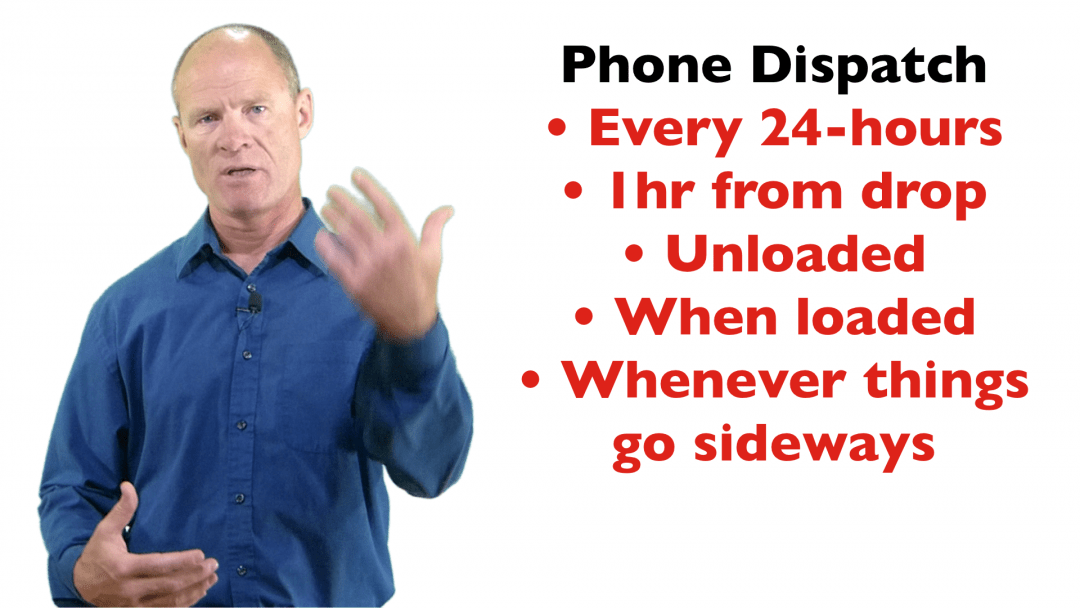 Regional truck drivers are probably going to be in contact with their dispatch on a more frequent basis, but minimum every 24 hours you are going to contact dispatch.

You also call them one hour from destination.

From the time that you're going to get unloaded.

Tell them that you're on time and that you're probably going to be there at seven o'clock in the morning if that was your ETA (Estimated Time of Arrival).

Yes in fact, I'm going to be there at seven o'clock in the morning.

Call them, tell them you're on time.

That way they can start the process for getting your next load in place - calling shippers and say, "listen my trucks is two hours away."

And then that way the shipper, for your next load, is going to be ready for you to arrive.

So one hour from destination, when you actually get unloaded, and you're going to pick up your next load.

You call them when you get unloaded.

You also call them if things go sideways.

You need to call dispatch to make a decision.

If you break down, you get delayed in traffic or congestion, or whatnot, or you get sick.

Anytime that things go sideways, you're going to call dispatch and inform them of what's happening.

Information to give dispatch

So when you call dispatch what information do you need to have to give dispatch? First and foremost, in large trucking companies you are going to be known by your unit number, whatever the unit number is on your truck.

You're gonna have to give that to them when you get loaded and you're taking off, you're going to give them an ETA to your destination.

How many hours you will have available.

Anytime that things go sideways, you're going to call dispatch. 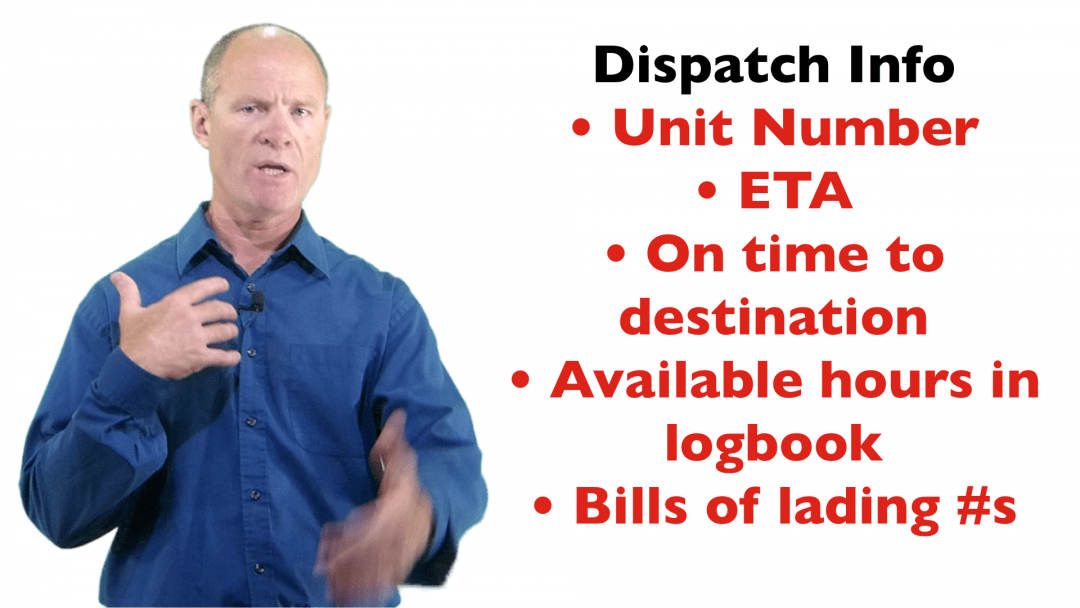 And again, the story that I told you at the beginning about the pallet and not wanting to put it on the truck with the full load because they owned the truck and they paid for it!

That's when you call dispatch.

So anytime anything goes sideways or you just don't know call dispatch.

And get some information because if you're new and you're trying to figure stuff out call dispatch.

They'll hook you up with somebody that knows the information or they'll find somebody that will get you the answer that you need.

So when you call dispatch what information do you need to give dispatch?

In larger trucking companies, you are going to be known by your unit number.

So you need to give them your unit number.

Obviously you can give them your first name too, that way you can have a bit of a conversation.

You're going to give them your location.

Are you on time to your destination: yes or no?

Reasons why that you may or may not have been delayed or you're ahead of schedule.

If you're running on a logbook, the available hours that you have on your logbook as well.

All of this is going to tie in to your route planning and your ETA.

And for route planning, I'll put a card up here and this will show you the other video on how to do route planning so that you can give dispatch a proper ETA.

Finally, dispatch might also want the bills of lading.

So those are the times that you call dispatch.

When you call them and what information you need to give them.

Remember you can't do your job without dispatch.

Think of yourself a little bit like a CIA operative - Central Intelligence Agency operative.

Dispatch is your handler - the ones that give you the information.

If you communicate effectively with dispatch they'll keep you rolling up and down the road - keep the wheels turning and keep your making money.

In conclusion, dispatch's job is to match available equipment and drivers with available freight.

Your job as a driver is to move freight and services between point "A" and point "B" as quickly as possible.

The two are integral - they dove tail.

If you do not communicate effectively with dispatch they can't do their job and they can't keep you moving up and down the road.

They can't keep you making money.

So call dispatch minimum every 24-hours.

The information you need to give dispatch, quickly: unit number; location; estimated time of arrival; are you on time; and the available hours that you have to run in your log book.

And they might want the bills of lading as well, but usually not as a rule.