There are various ways that truck & bus drivers get paid. Ensure that you do, in fact, get paid for the work you perform.

We all like to get paid, we all like that paycheck at the end of the week - every two weeks. We're gonna be right back, we'll talk to you about that.

There are two major ways that CDL truck and bus drivers get paid, either piecemeal:

Piecemeal, now in this day in age most long haul drivers make about 47¢ cents a mile, depending on what you're hauling whether you got a reefer, you got a van trailer, or you have a flat deck you might get paid for tarping, you get paid for drops, you get paid for retarping, and there's all kinds of other things that you could potentially get paid for.

So every time I went over the George Washington Bridge into Manhattan I got an extra $50 a day. So in the early 1990s I was making fairly good money because I got paid piecemeal and by the hour. 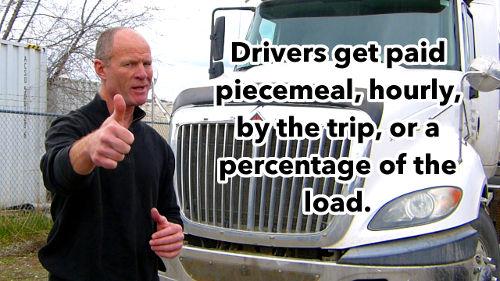 The other thing is if you get paid piecemeal—by the mile—there's two ways that you can get paid: either by the hub or map miles.

Getting paid by the hub you get paid for every mile that you drive on that trip or you get paid map miles. Map miles can be somewhat less than what actual miles are - 10 to 12 percent.]

Now in the last company that I work for, Pacific Coast Express, I had to make sure that, for example, if I was going to Edmonton I couldn't just write Edmonton down on my trip sheet.

I had to write the postal code of the place that I was going to because I just put Edmonton I just got paid to the yard in Edmonton where the the PCX yard was.

Now if I went somewhere else in Edmonton I had to be sure to write down the postal code. So know exactly how you have to fill out the paperwork so that you get paid correctly when you're running by the mile.

Percentage of the Load

One other way that you might get paid is by a percentage.

If they own both, the percentage of a load can be as high as 90-93 percent.

The company that they're working for that is getting loads and what not for them will only charge seven to 10 percent of that load for the administration costs, the dispatch costs, and whatnot.

So the other way that brokers and owner-operators will get paid is a percentage of the load.

Now one other thing that I will say about getting paid: if you go to work for a broker or smaller company or what not and you don't get a paycheck after a week and you've only been there a couple of weeks, I would say don't continue working there because it's unlikely you're going to get paid.

Its just a precaution because if you don't get paid after week they're having some troubles and just I would suggest that you move on.

Now saying that if you've been working for a company for a year, a few months, you have a good relationship with them and they say, "listen we'll get you next week." That's a different story right and that's kind of your own discretion but make sure you get paid.

Because all of us like to get paid right and unfortunately I've heard quite a few stories in the industry of guys going to work for brokers and whatnot and they don't get paid.

Now the other thing on that note of not getting paid for a lot of people getting into the industry in new people especially if they run long haul...it can be a bit of an eye opener for some people and some people:

Instead of being the sort of upstanding person that they might be, they just dump the truck in a truck stop somewhere, get on a bus or get on a plane and come back home.

These big companies in the United States, these big truck trucking companies like Schneider National & JB Hunt - they have people who recover units.

That's all they do. They fly around the country, they they find vehicles that have been left in truck stops and whatnot and they bring and recover equipment. So that's another thing about pay as well.

You get paid by the mile there's two ways you can get paid: either hub miles or map miles.

Hub miles are the actual miles you drive; map miles can be a little bit last usually about 10 to 12 percent less. In compensation for map miles, I will say this most companies will pay you a couple cents more if you're working piecemeal.

The last way that you could get paid is a percentage. It tends to be more for owner-operators and brokers.

And if you don't get paid after a week and you've only been working for a company for a couple of weeks I would suggest that you move on.