All in the attempt to retire with a little bit more money in his pocket.

And giving you some insight about what it's like to drive truck in the oil patch on really thin, narrow roads.

One of the other things to keep in mind with Bill, is that Bill went right out of driving school, with no experience working in the oil patch.

I think it would be an eye-opener for me! For somebody who had no experience driving truck up to that point, I think it would have been just a bit of a shock to the system.

And as he says, scared "spit-less!" 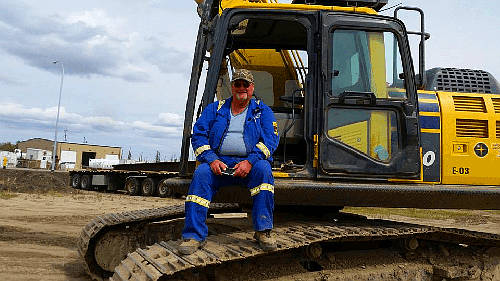 He's working in the oil fields.

He's a former student of mine and we're going to ask some questions and give you some idea what it's like driving truck in the oil field in Alberta.

The oil fields in Alberta!

If you're thinking of going you might want to think again.

It's, it's pretty interesting.

My visions of penny loafers and polo shirts, driving down the road...no, not so much!

Leather work gloves, coveralls, big boots, rubber boots...yeah quite a bit of that.

Slipping and sliding around in the mud.

Up the hills, down the hills.

I don't know; we can get into that later I guess.

So, how long have you been in the oil fields now Bill?

The following Tuesday, I was in Grand Prairie and I was hired that day and went to work, actually Wednesday morning - the day after.

So, I've been working in the oil field for what, a year and three or four months.

And so you said to me when you and I trained together, a little bit over a year ago that you were planning on retiring; so you're a bit older than most people who are working in the oil fields?

And the whole idea was to go up and spend the last three years of my working life making bigger money.

It's the only reason you go to northern Alberta - believe me there's no beaches up there worth going to.

You're going up there to make money! And so that's why I went.

The surprise was... I mean, I've driven everything but truck over the years.

I wasn't prepared; I was mentally not prepared for how hard it was going to be.

So, you and I have had some conversations on Facebook and we got together for coffee in the interim periods you been back in Vernon, BC, and you told me a few times that there were some serious points that you were not going to continue on.

Well yeah... I mean, I don't know... I guess maybe if you're younger it's easier to handle... I'm not sure but, quite frankly just being scared "spitless," most of the time... For I mean, right up until we...

I started in September, we got a decent September, October was not too bad, it wasn't even a real muddy fall.

But then it got cold. Right.

And then came the ice, and then comes the snow, and there you are at 5.30am in the morning at -47°C below laying on your back beating on the bridge on the inside the brake drums trying to get the brakes thawed out. 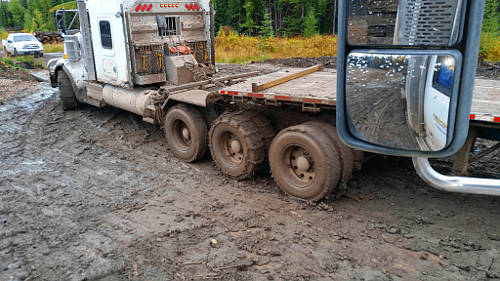 So trying to get equipment to do something that it's not designed to do; working in sub-zero temperatures?

Because when it gets to -47°C below, it ain't liquid anymore!

It gets all through this system and then you're up there trying to pour anti-freeze down the gladhands.

And there's just so much to learn.

And for one, checking: have you ever seen those ribbons that hang out the inside of the wheels; on a wheel they're bolted on, like one of the studs. 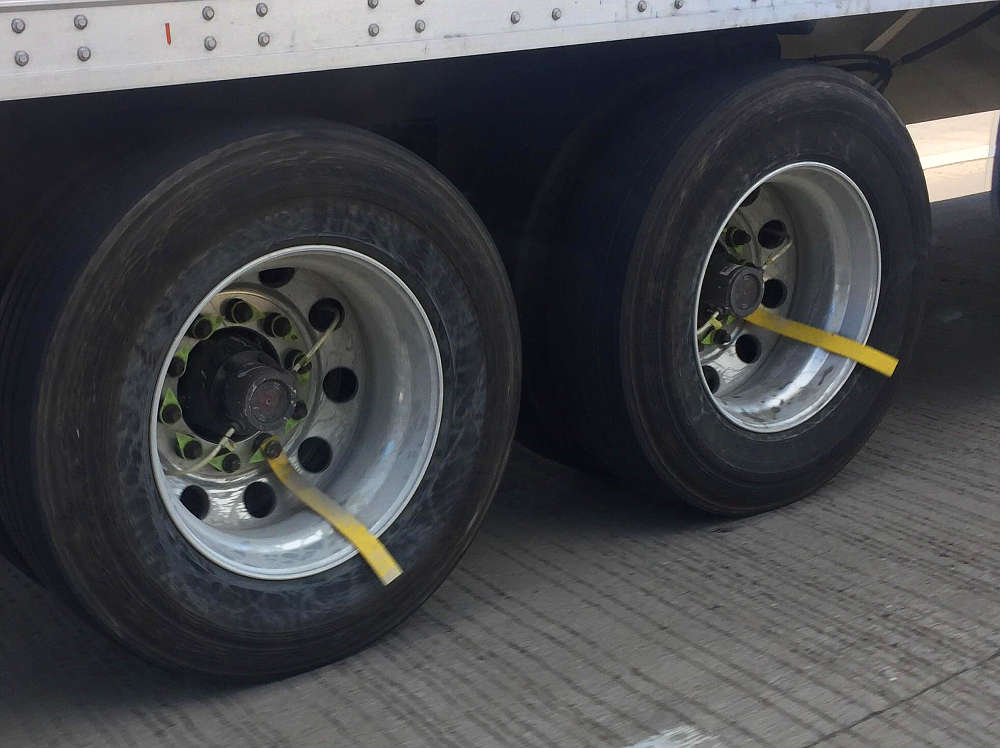 And this plastic ribbon comes out.

It hangs out about this far.

Ok, I know what you're talking about.

Well you look down the mirror and if they're all moving, it means you don't have a frozen wheel.

And it's just that simple.

If you got one that's not moving andit's hard to tell if your on ice.

It is hard to tell that you don't.

But... you don't really want to do it on the pavement.

They call it "SKIDDING," and it sorta goes through a tire--2 tires--pretty quick.

Yup... we had a similar thing when I was hauling multiple-axle trailers, you had to drop the axles and make sure that they were all turning before you took off.

And it was part of your pre-trip inspection.

You did a little serpentine and made sure all the wheels were turning.

You got you back up lights on so you can see your wheels.

Yeah, because most of this stuff is happening in the dark, right?

Well, it's dark up there most of the time in the winter time, and it doesn't get light until after 9am, 9 o'clock in the morning--right--right now.

Yeah, so now you said that you were having difficulty getting equipment going, but also just being scared, working on bush roads, and putting chains on all the time, and driving in mud and snow and ice?

A loaded Super "B" train is 63,500 kilograms; one hundred forty thousand pounds.

And it's... and it's just not as much fun as you think when it all goes sideways down the road you know.

I mean, it may look neat from some other point of view, but well, when you're behind the wheel, it's scary... I don't know... I don't know what scared me the most really, whether highways, and today I really do think I'm...  when it gets really icy out on a highway - that's probably what I like the least.

They're NOT two and a half lanes wide.

So, you need to know exactly where your wheels are.

You're running... your probably running your right wheel six inches from the cliff all the time!

You know, at least when you have somebody passing.

And the mud up in northern Alberta: it's so slippery, and it's a different kind of slippery than the ice. 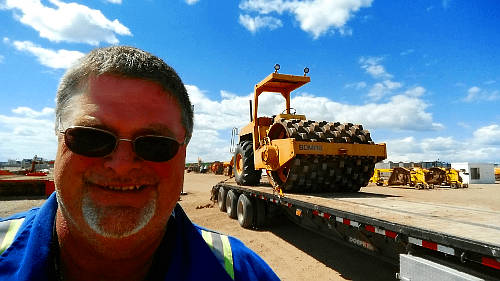 The trailer slides in the ditch; it just...on its own...

the guys nowhere near it.

He hasn't moved for 5 minutes.

The trailer slides in the ditch.

And they don't like trailer's sliding in the ditch.

So when they do slide in the ditch, there's equipment around that can get them pulled out?

Everybody helps each other.

You've all got big fat tow straps in the truck.

You know, I've got a headache rack on the back with chains, which you don't really want to use anymore, but if you had to, you had to, but you know I would hook onto the guy and pull him out of the ditch or a loader would be there or you know somebody's in trouble, somebody stops to help.

There's kind of an unwritten rule in the bush: you know, if you're in trouble the next guy's gonna stop.

And it's so busy out there! You just can't believe how busy it, well... not so much now, but it was - really busy! Rush hour traffic the middle of nowhere! It's crazy!