Today we're going to talk to you about cruise control, how you can save fuel, how you can reduce distracted driving, and how it works.

The reason I talk about distracted driving is because you don't have to look and monitor your speed all the time.

If you're looking and monitoring your speed all the time, that causes you to be distracted because now you're worried about speeding tickets & those kinds of things.

You put the thing on cruise control, you don't have to worry about speeding tickets.

The other thing that people talk about with cruise control is that they don't have control.

Essentially, what they're doing is they're following too close.

What you want to do is you want to be in the spaces between the cluster of vehicles, and you want increase your following distance. 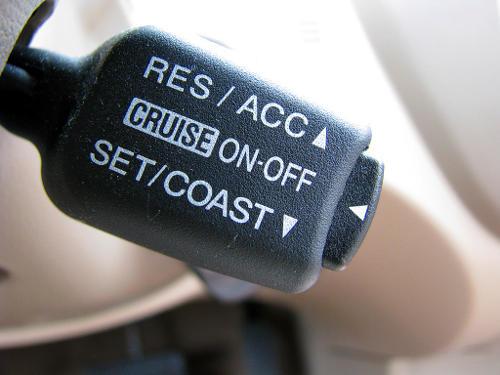 Almost all cruise control switches have the same features.

Familiarize Yourself - Try It Out

I'll move the camera for you and I'll show you how the cruise control works and if you want to reduce some of your distracted driving get familiar with the controls just go out on a road that's not too populated and kind of get used to it and you know just practice using it.

The other thing a lot of people think is that you gotta get on the highway and you have to get up to cruising speed and be on a freeway for a long period of time to use cruise.

That's not true at all. If you're on a road like this here, and you need to do about 60 kilometres an hour which is what the speed limit is, just set your cruise control - drive down the road - you're going at the appropriate speed - and the vehicle holds.

The other thing that a lot of people don't know about cruise control is you got "set" and "resume".

So if you kick the brake off—you need to slow down or what not—then you want to go back, you just hit the "resume" button & away it goes again.

Most people are familiar with those controls on the vehicle.

The other aspect of cruise control that a lot of people don't know is is that if you hold the "set" down, the vehicle will decelerate as long as you hold the button down.

Conversely, if you hold down the "resume" button, the vehicle will accelerate for as long as you hold the button down.

A lot of people are familiar with that aspect of cruise control as well.

The other aspect that people aren't familiar with in terms of cruise control on the "set" and "resume" even though it accelerates and decelerates as much as you want for as long as you hold down the buttons.

Now if you push the decelerate button one-time, hold it down, click it down one time, the vehicle will decelerate one kilometer per hour for every time you click it.

So if you're two kilometers an hour above the set speed, or two miles an hour in the United States, it will decelerate one kilometre an hour or one mile an hour, depending on which country you're in.

As well, it'll do the same thing on accelerate. If you set it at 48 miles per hour, for example, and you want to go up to fifty, you simply click the acceleration button twice, and it will go up one kilometre an hour or one mile an hour, depending on which country you're in.

And as I said, it reduces driving distractions, reduces the chances of you getting speeding tickets because you don't have to monitor your speed all the time. You know at what speed the vehicle is going.

And increase your following distance behind other vehicles - that way you're going to compensate for their speeding up and slowing down.]

You got to turn the cruise control on, set the speed, resume if you slow down or kick the brake on, its gonna kick off.

If you got a manual transmission if you touch the clutch, the cruise control will kick off.

Use cruise control to reduce driver distractions. The possibility that you're going to get a speeding ticket and to increase your fuel mileage by 12 to 15 percent. Not just for on the highways, in town as well.

As the driving manuals all say, you know, if it's bad weather—ice and snow, or it's raining, you know, avoid using the cruise control - better to use the throttle.

A lot of people don't know that the accelerate-decelerate, as long as you hold that button down, it'll decelerate or accelerate.

So you can essentially drive the vehicle with the hand controls. Just a bit different getting used to hand controls as opposed to your feet.