"Not So Fast" by Tim Hollister provides information about the risks associated with teen driving. The book advocates tougher Graduated Driving Licencing Programs. 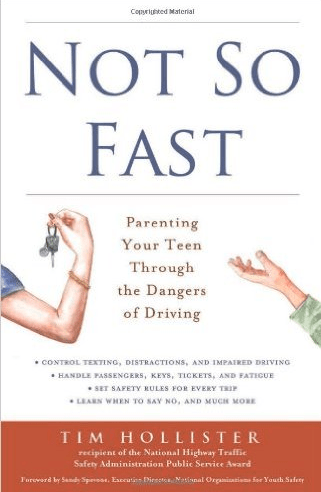 Book Review: "Not so fast: parenting your teens through the dangers of driving by Tim Hollister.

The book was published in 2013 by Chicago Review Press and is a good read and merits the attention of parents who have learning or novice drivers in their house. Unfortunately, the book's motivation was the death of Tim Hollister's son Reid who was 17 at the time in 2006, died in a car crash on an interstate in Connecticut, at night after a rainstorm, and without a doubt this is a book written from inexplicable grief and enduring pain.

The purpose, as Tim Hollister says at the outset, is to help parents make decisions regarding their teens and helping them to mitigate the risks associated with learning to drive. Because for teen drivers as group, they're at very high risk for being involved in a motor-vehicle crash.

GDL is the graduated driver licensing program. The first one was implemented in New Zealand in 1987. After the implementation of New Zealand's GDL program, it snowballed, and by beginning of the 21st century most industrialized countries, most of the G20 nations, states, and provinces had a GDL or GLP program-- graduated licensing program--in place. These have four basic components:

2) restrictions on cell phones - either hand-held or hands-free cellphones;

4) number of passengers in the vehicle are restricted to one passenger.

The book identifies four reasons that young people are at high risk of crashing.

1) One of them is biology - that their brains do not fully mature until they're age 25.

And hazard perception I am very much in agreement with. The development of those skills and abilities takes three to five years as Mr. Hollister states in his text. And the reason it's so difficult is because the task of driving is so dynamic.

And all of the circumstances that come together the dynamic features of our roadways come together and in different situations can have very different repercussions for drivers.

So the driving task:

All of those things can combine in a multitude of scenarios where in one scenario, on one given day is going to be completely innocuous; on another day it is going to be lethal for drivers and drivers have to be able to identify that and take evasive action.

It cover some other the familiar ground that we have in terms traffic safety: distracted driving; fatigue drinking and driving; drugs; earphone's; GPS; all these things in terms distracted driving which has been at the forefront of traffic safety in the past decade and really coming to awareness of how how much the risk of being involved in a traffic crash occurs when drivers are using cell phones, or eating, or combing their hair, or doing their makeup, or whatever their doing while their driving. So, the book covers a lot of this.

There is also some stuff that I'm not in agreement with. In the last chapter in the book he stops just short of advocating a police state for young people - that we should be "dobbing" them in. Unfortunately, this come to a real head-on sort of collision, for lack of a better word in terms of our culture and dobbing other people in and snitching on people. I mean I can totally understand and be on board with his intent but being a snitch, dobbing people in, calling teenager's parents... I see that as being really problematic and creating a lot of conflict for parents of young people, and drivers, and those types of things. I think there are other solutions, but I understand... I totally understand his motivation.

The other problem I see with the book is is that it ignores the larger context of driving. Driving is dangerous for all drivers and a statistic: in the 20th century, for example, driving killed, injured, and maimed more people then soldiers sent to war in the 20th century. So, we're talking the first world war, the second world war, the Vietnam War, the Korean War, the Middle East. So, the motorcar, in terms of the number of lives, injuries maimings, that it claims: it's dangerous for all people.

Seniors, on the other hand, also have a similar crash rate when compared on a per hundred thousand kilometre rate as young people. So, its easy to take aim at young people and impose more rules, more regulations, and more criteria which they have to follow to earn a full license.

Seniors, on the other hand, who have a similar crash rate, not so easy. They have enormous political clout, they know the system, and they have time and resources to combat political regulations, or political moves to impose sanctions on their driving. As well, as the baby boomers are on the footstep, or the door sill of retiring, these people are in positions of power and they're the ones looking down the road and going, "well, I'm going to be retiring in a few years, I'm not going to impose sanctions on my own driving."

So it's easy to heap more regulations, and rules, and laws on young people to get licenses. But I'm not totally convinced that that is the answer for young people in order to keep them safe. I think the relationship between parents and young people starts at a very early age. Children learn how to drive sitting in the back seat and watching us, in terms our reactions to traffic situations - our attitudes, whether we:

which are the top three reasons for traffic crashes.

The relationship between parents as drivers and young people is imperative and it needs to start at an early age. If this has been done, this book will augment that relationship and help you to mitigate the risks associated with teen driving. If that relationship hasn't been established since the beginning, then unfortunately this book is not going to help.