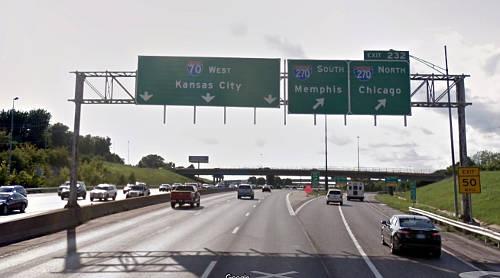 A limited access highway has on- and off-ramps where you can get on and off the freeway.

These roads do NOT allow bicycles, farm or industrial machinery, pedestrians and any other slow-moving vehicles.

All traffic moves in one direction.

East-West Interstates in the United States are even numbered with I5 on the west coast and I95 on the east.

North-South Interstates in the US are odd numbered starting in the south with I8 and ending with I94 in the north.

Mile marker numbers in the state start in the south and increase as you're going north.

For even numbered interstates, the mile markers start at 0 at the west side of the state and increase as you travel east.

Three digit interstates that start with an even number return to the parent.

It's either a ring road around the city such as I275 around Cincinnati, OH or a radial road.

I265 around Louisville, KY is an example of a radial road.

I395 in Washington, DC is a spur road in the city and does not return to the parent.

I395 simply terminates in the downtown area of the capital.

How to Use Google Maps

Here you can determine the length of the trip via different modes of travel: car, transit, plane or walking to name a few.

Also, you can locate construction, speed traps, and restaurants along the route.

Spend a bit of time on Google maps to determine a pleasant trip.

Most important, you can time your departure to avoid congestion and other travel delays.

When route planning, take note of the mile markers where you're going to exit the freeway.

These mile markers allow you to be a safer, smarter driver.

If you're exiting to a restaurant at exit 365 for example and you're at mile marker 360, you know that you have to start moving to the right.

And you know that your exit is 5 miles down the road.

With this information, interstates become much safer and more enjoyable.

Most on- and off-ramps are going to be accompanied by overpassess and signs.

With these signs and structures you can locate where other traffic is going to be getting on and off the interstate.