The three ways that road signs convey information are:

3) the text or symbols that are on the road signs.

These are the three ways that road signs convey information to road users.

Today we're going to talk to you about the major classifications of road signs and this will introduce the road sign playlist here on Smart Drive Test.

GUARANTEED TO PASS FIRST TIME OR WE'LL REFUND YOUR MONEY

Regulatory Signs - Yup, these have to be obeyed!

First and foremost are the most prominent are regulatory signs.

The root word of regulatory is regulation.

Regulation means law and if it is the law you must obey that sign.

And the major regulatory signs are STOP signs, yield signs, railway crossing signs, and speed signs, which are the rectangular signs with a black border, white background and black text or symbols.

These are all regulatory signs and must be obeyed.

And drivers must have a knowledge of these for the purposes of road test to be successful - either on a learner's or on an and on-road road test.

They have a white border, they're red backgrounds and the letters STOP written in white on them.

If you're on a native reserve they might be in the language of the native reserve on which you're on or if you're in Quebec they'll be in French: Arret, which means to stop, as you can see here in the image.

It has a wide red border with a triangle-a smaller white triangle-in the center.

The yield sign indicates to the driver that they must give the right of way to traffic on the road which they're entering or to any pedestrian traffic or other road users.

The next regulatory sign is rectangular in shape with a black border and a white background - mostly speed signs, but slower traffic move to the right.

For those of you traveling less than the traffic flow and are traveling in the hammer lane it indicates to you‚—yes you—that you should move over to the right lane, which is considered the slow lane so other people can pass.

In most provinces in Canada and in the United States, they are beginning to standardize this.

It is an 'X' with a red border and white background.

It indicates a railway crossing.

If you're driving a larger class vehicle, such as a bus you may have to stop.

If you're driving a truck hauling dangerous goods, you may also have to stop before proceeding across the railway crossing.

If you're taking a road test in a manual transmission, no shifting over railway tracks for the purposes of a road test. 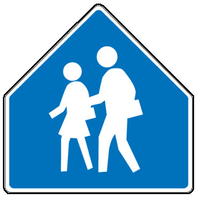 It is a pentagon and looks like a house with five sides.

Most of these are going to neon green and they are beginning to standardize these, however some of them can be blue or they could be green indicating a school zone.

If you're in a school zone in Canada you have to drive 30 kilometers an hour; if you're working in the States and they have a school zone it will be 20 miles per hour.

On a driver's test, it is an automatic fail if you speed in a school speed zone.

In British Columbia, for example, they don't have a sign indicating the end of the school zone.

So when you're driving through the school zone you have to look for the sign on the other side of the road and see the back of that sign.

It's a pentagon in shape and you'll be able to know that you're at the end of the school zone and that you can resume speed after that sign.

Do not speed in a school zone if school is in session - that's an automatic fail on a road test.

Some are important, some...not so much. Yet, others could save your life!

They are usually diamond shape, however they can be rectangular.

They have a yellow background and the writing on them is black or the symbols are black on the cautionary or advisory sign.

One of the most common signs is the hazard obstruction sign, which is rectangular and has the hash marks on it to the left and right.

And there's a full video.

I'll put a card up here for you about the hazard obstruction signs that will warn you of hazards and obstructions on the roadway and on which side to pass or whether you can pass on either the right or the left.

Next signs on a roadway, which are the most important—especially now in the summertime—construction season.

These are usually diamond shape - they have an orange background with black lettering or symbols on them, which which tell you of construction zones.

Again if you speed through a construction zone - automatic fail.

The next one is lane usage as you can see here.

The arrows on them indicate which lane you're going to be in and what that lane is going to do, whether it's going to turn left or right.

Usually these lane marking signs are overhead of the lane and they are in conjunction with road markings of the same arrow that is on the sign will also be painted on the road surface.

So have a look.

Sometimes the road markings are a little hard to find in the spring because they've been worn out by snow plowing action & traffic and whatnot.

Services signs are rectangular, blue with a white background and lettering or symbols are white on them.

These usually indicate hospitals or other services.

Hospitals are the most prominent as you can see here in the image.

Action permitted: rectangular in shape with the green circle.

Some provinces use these as opposed to the inverse, which is "action not permitted", as you can see here, which is the same rectangular sign with a white background.

Except it has a red circle with a line through it which tells you that there's no stopping, no parking - whatever action is not permitted in the not permitted sign.

You will be tested about the signs on the learner's test, so make sure you know action is permitted and actions not permitted.

It is usually green with white lettering on them & will tell you how far you are from a destination.

For example, if you're in Kitchener, Ontario and traveling to Toronto, it will tell you the distance from where you're at to Toronto and how far it is.

So if it's a hundred and ten kilometers to Toronto from Kitchener and you're traveling at a hundred and twenty kilometers an hour, which is the speed limit on the 401, you know that it's going to take an hour to get there.

So it can also give you an ETA—an estimated time of arrival—if you pay attention to these signs and how far you can travel in a set amount of time at a given speed.

So destination signs, services the other sign here you can see is brown - trapezoidal shaped in the United States these will give you forestry information and provincial parks and whatnot.

Some of these will be written on brown signs - that's the last classification.

It's not really a major classification of signs, but just to give you some indication this sign will give you information about parks and forestry & those types of things.

Those are the major classifications of signs that you will need to know for the purposes of a road test.

In conclusion, regulatory signs are the major classifications of signs.

The root word of regulatory is regulation.

It means the law & you must obey these road signs.

So know your regulatory signs:

• and school signs are all regulatory signs.

The next one is lane usage signs.

You can see here it's black with a white border.

The arrows on it are white as well.

Advisory and cautionary signs warn you of hazards & obstructions on the roadway & anything else that you could potentially run into - reduced speeds and those types of things are all cautionary or advisory signs.

These are usually diamond shape, but can be rectangular, yellow with black lettering or symbols on them.

The construction sign is orange with black lettering or symbols.

Make sure you pay attention to construction signs.

As well, in many States and many provinces the reduce speeds, if you're speeding in a construction zone the fines are doubled.

So just keep that in mind if you decide that you're going to go too fast through a construction zone.

Finally destination signs are green with white or lettering or symbols on them.

Usually it's lettering, which will tell you how far you are from a town, city, or hamlet and you can figure out an ETA from the destination sign.

Services are usually blue, rectangular in shape, telling you of hospitals and other services in the area.

Forestry & parks can be brown with white lettering on them and that's the last classification.