How to Deal With Railway Crossing Signs for Road Test

Trains are dangerous because they don’t keep schedules.

Rick with Smart Drive Test talking to you today about the railway sign and railway crossings.

When I moved to BC's interior a couple of years ago, I was stationed in Kamloops, BC, Canada to do some training and I have to say that up to that point I'd lived in Ontario and Australia, and trains and railway crossings in terms of driving had been more or less off my radar. 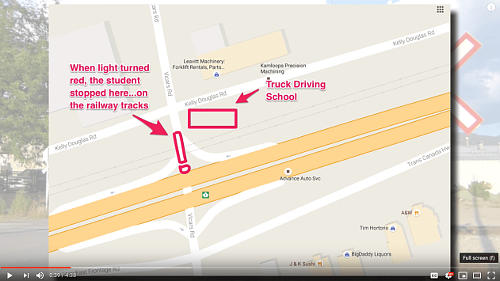 And where the school was there in Kamloops was not too far from the railway crossings.

You had to go over the railway tracks just as soon as you came out of the school.

The student stops behind the railway tracks and waits for the light to go green.

On the green he proceeds up to the intersection.

As soon as he gets to the intersection, the light goes red.

He stops and the trailer is hanging back over two sets of railway tracks.

Fortunately nothing happened, but I'll tell you, it was a few tense moments of sitting on railway tracks in a town where you don't know when the trains are coming.

We'll be right back to talk to you about railway crossings.

Today we're talking to you about railway crossings and the railway sign.

One of the reasons that trains are so dangerous is because trains don't keep schedules!

Trains Have the Right-of-Way...for obvious reasons!

You don't know when they're going to show up.

And the other thing that you need to know about trains especially for a road test - trains have the right of way.

You need to give trains the right-of-way.

50 to 60 people in Canada are still killed every year by trains. 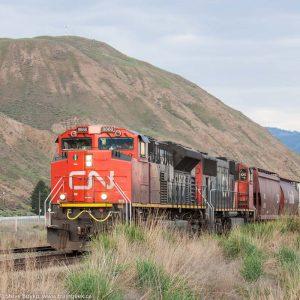 They run into the side of the trains because they don't see them.

And the other significant portion of people who are killed in car-train crashes are because there's multiple tracks and one of the trains is hidden by the other train.

So they don't see the train, drive onto the tracks, and are hit.

All railway crossings that intersect with roadways have some sort of control.

They may also have lights and gates.

If there's a gate and the lights are flashing, you cannot proceed until the gate goes up.

Where to Stop to Wait for Train

You must wait - don't get on the track and have the gate come down on your car.

I've seen that happen too.

As well, stop 15 meters from the railway crossing.

If you're stopping near railway crossings: five meters from the track; no farther than 50 meters back.

So 15 to 50 feet away from the railway crossing.

Do NOT Shift Manual Transmission Over RR Tracks

For the purposes of a road test if you're driving a manual transmission - do not shift over railway tracks.

It's major demerits on a road test.

Breaking Down On Railway Crossing

Finally, if you're unfortunate enough on a railway crossing to have your vehicle break down or you get stuck on the tracks for whatever reason, get clear of the vehicle and get all passengers out of the vehicle as quickly as possible.

Move at least 30 meters or a hundred feet away from the railway tracks and call 911 or call the local police.

All Railway Crossings Have Location

As well, as you can see here in the image the location of the crossing is right on the railway sign.

It'll either be on the front as it is here, or it'll be on the back side of the railway sign - so the exact location. 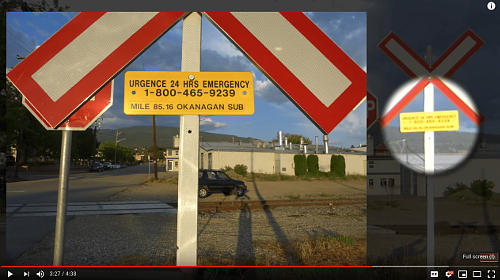 So when you call emergency services, make sure you have the location so they can send people out as quickly as possible to remove your vehicle off the railway crossing or whomever might be.

We all have cell phones in this day and age, so make sure you have that information to help out emergency services, so they can get you off the railway crossings as quickly as possible.

All that helps us out.

Have you ever been unfortunate enough that your vehicle broke down on a railway track?

If it did, leave the story down in the comments there.

All those stories help us out and help drivers out in case they find themselves in the same situation.

Remember pick the best answer not necessarily the right answer.

Have a great day. Bye now.