One-Way :: Do Not Enter Signs

One-way signs are crucial for passing a driver's test.

Rick with Smart Drive Test talking to you today about the one way sign.

Its rectangular in shape, it has a black border and a white arrow designating the direction of travel for the traffic. 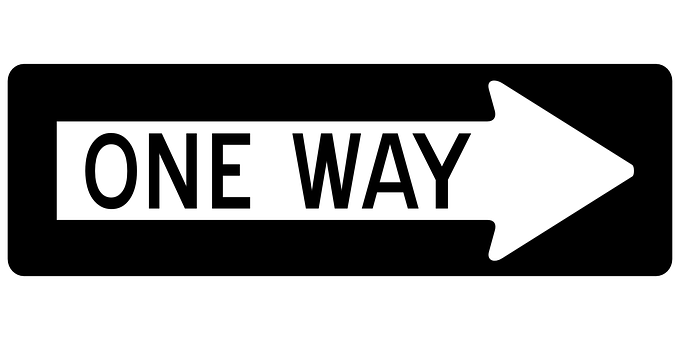 Risk of a Traffic Crash

If you go the opposite way of the arrow, you're going against opposing traffic and you're going to risk a head-on collision.

So make sure you go the right way down a one-way street.

So if you see the "do not enter", it's often at the opposite end of the street with the one way sign on it.

So you know to not enter because oftentimes it's a one-way street, but there's other reasons for the "do not enter" sign.

But this is one of the reasons.

Check up here in the corner for the complete video on the "do not enter" sign.

If it's a 'T'-intersection, the one way sign will be on the far side of the intersection telling you which direction the traffic travels along the one-way street.

On a conventional intersection-- where to roadways come together-- there will be plenty of one-way signs.

If you turn the wrong way on the one-way street, as you can see here behind me, there will be a do "not enter | wrong way" sign.

If you are unfortunate enough to turn the wrong way on a one-way street, get your vehicle parked, get it turned around and get going the right way on the one-way street.

Because you don't want to risk a collision.

Unfortunately if you're on a road test and turn the wrong way on a one-way street, that's an automatic fail.

In combination with the "do not enter" sign, the other way that you can tell that it's a one-way street--is in North America--the lines, the lane marking lines, will be white and white only. 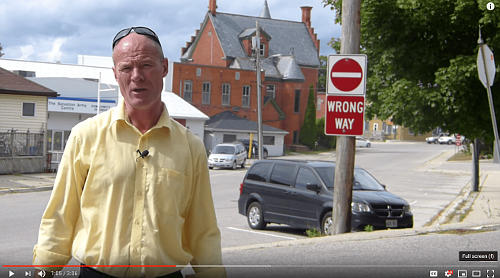 So take note of the lane markings on the roadway.

If they're white, it's one way and you'll know that: if it's solid white line, you can't cross over between lanes; if it's broken white lines you can.

More Than 40% of Crashes Happen at Intersections

Oftentimes solid white lines are near or at intersection.

So therefore you will know that you can't change lanes at or near intersections for the purpose of safety because as we know 40% (forty percent) of crashes happen at intersections.

Cities with Lots of One-Way Streets

Now, some cities have a lot of one-way streets, others don't have very many.

Hamilton Ontario, for example, has a lot of one-way streets; Manhattan, New York has a lot.

Every other street in Manhattan is a one-way street. 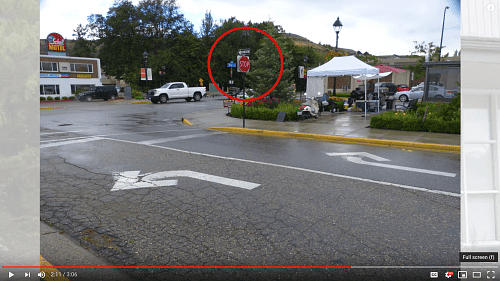 So if you're NOT familiar with where the one-way streets are, go to a local driving school, hire a driving instructor and get them to take around on a mock road test.

That will help you out for one-way streets - whether you know that they're there or not.

All of that helps us out.

Remember pick the best answer, not necessarily the right answer.