How to Stop for School Bus | Road Test Smart

Do you know the rules concerning school buses when learning how to drive? Watch the video!

How to Stop for School Bus | Road Test Smart

Hi there smart drivers. Rick with Smart Drive Test talking to you today about school buses. And yes school buses, which are prolific in North America. In Australia in other countries, they don't have yellow school buses. Now just before we get started here for those of you working towards the license or starting your career as a truck or bus driver, be sure to hit that subscribe button right about there. That way you'll get access to all of the great information as I get it available to you.

Yellow school buses in North America...it is the law that you must stop for a school bus when it is taking on or alighting passengers, and the red flashing lights are activated. If you don't stop, there is a very, very stiff penalty: six points on your license in most jurisdictions and a very stiff fine. And bus drivers and eyewitnesses can report drivers that try to pass a school bus during the time that it is stopped and taking on or alighting passengers. And in this day and age, I don't understand why anybody would try to pass the school bus when the red lights are activated, especially with prolific dashcam use.

You'd be more than likely to be caught on somebody's dashcam. Because I have a dashcam in my vehicle and I just let it run all the time. Simply because of the videos that I make about teaching students how to pass a road test and learning how to drive. So it's very easy for police to get people and to convict drivers in a court of law. Because the laws surrounding not stopping for school buses reflects the values of our society and children our most precious cargo and when drivers do that sort of thing it is simply malicious and the courts are intolerant to drivers passing school buses. So today we're going to talk a little bit more about school buses and the laws surrounding school buses. So stick around, we'll right back with that information.

Hi there smart drivers, welcome back. Rick with Smart Drive Test talking to you today about school buses. Particularly yellow school buses, which are prolific in in North America. As I said in the introduction, they don't have them in other parts of the world. And I can remember my wife from Australia who was quite fascinated with yellow school buses when she came here because it is one of the cultural landmarks of North America.

Now just saying that, in relation to driving when school buses are traveling along highways and come to a stop to either pick up or alight passengers you must stop when the red flashing lights are activated. The only time that you don't stop for a school bus is on a divided highway that is divided by a physical barrier, whether it's a concrete barrier, or it's a berm--a built-up pile of earth--or a physical nature strip divided by trees or something like that. On most divided highways, which is most of the places where you're going to find school buses you must come to a stop.

Now most modern school buses all have the same technology - more or less. In some of the US states they'll have strobe lights on the top of the school bus, which will attract your eyes because our eyes are attracted to light and movement. Especially those flashing lights which are kind of annoying, so it gets your attention and draws your eyes into the fact that there is a school bus operating on that roadway. As well, in addition to the red flashing lights, there are yellow or amber flashing lights that warn you that the bus is about to come to a stop. And these will be activated a few hundred yards or a few hundred meters before the actual stop. And then once the bus comes to a stop, the red lights will activate.

As well, all modern school buses have retracting stop signs on the side of the vehicle and the stop sign is a conventional red, eight-sided STOP sign that has two flashing lights on it to indicate to other traffic that you have to come to a stop in both directions. Not just behind the bus, but also in front of the bus.

As well, when you're traveling on rural roads and highways, you're going to find school buses there during school hours just before school hours as they're transporting students to and from school. So in the morning between sort of seven o'clock in the morning maybe quarter to 7:00 in the morning to eight o'clock. And then in the afternoon from sort of 2:00pm to 5:00pm in the afternoon are the most prevalent times during the school year that you're going to find school buses. Now in the laws and regulations it says that you must stop for school us anytime that they've stopped and activated the red overhead lights and the sign has come out - the stop sign on the side of the school bus. So it's not just those times before school starts and after school but also anytime during the day that a school bus is stopped with the red lights are activated you must stop for the school bus.

Now as I said in the introduction, the fines for attempting to pass the school bus are stiff indeed. And most of the time if you're prosecuted by the police and called to court for court action against you, it is unlikely that you're going to be acquitted because this is seen as one of the most heinous traffic violations. It's probably even worse than drunk driving. So it's unlikely that you're going to be acquitted if you are called to court to face a driving charge for passing a school bus when the red lights are activated. As I said, for the first instance, the fine is very high - lots of demerit points. I believe in Ontario you're allowed 15 demerit points, so you get six points on the first offense and then on the second offense you can face jail time. And as well, the driver of the school can act as an eyewitness and other traffic on the road too. And as I said in the adduction, most people in this day and age are running dashcams in their vehicle. So know that it's unlikely that you're going to get away with this if you do pass a school bus. And it just boggles my mind because it's not like you're saving very much time.

How Far to Stop From the School Bus

Now as you can see here in the footage, when you just come up you just stay back from the school bus when you stop. You want to stay back quite a distance - you know five or six car lengths, because you don't need to be right up on the school bus. And give yourself lots of distance because it is a larger vehicle and that will allow you to see around the vehicle and see where the children are--the students and those types of things--getting on and off the bus. So allow yourself a good distance in front and behind the vehicle. The regulations in some jurisdictions say 20 meters or 60 feet which is about three or four car lengths to stay back from the stopped bus. So stay back a good distance when the bus does come to a stop. And know there's going to be areas where the buses are going to be more prolific and it's more likely that you're going to find school buses.

So just sort of keep that in mind when you're traveling in rural areas. And the other thing is, often times there will be cautionary signs that will warn you that there are school buses operating in the area picking up and letting off students. So that's a bit of information about school buses.

Quick review of stopping for school buses taking on and alighting students who are going to school. Yellow school buses are prolific in North America. They don't have them in other parts of the world. All modern school buses will have yellow amber lights that will warn you that the bus is about to come to a stop. It has red flashing lights and when the red flashing lights are activated traffic in both directions must come to a stop. as well, there's a retractable STOP sign with two red flashing lights on it on the side of the bus that will activate. As well, and there's a cattle guard in the front that forces the children out farther in front of the bus so that the driver can see the children as the cross in front of the bus. The only time that you don't have to come to a stop for a bus alighting and taking on passengers is when the highway is divided by a physical barrier where there's a berm or a concrete barrier or some sort of nature strip in between the two highways.

That's the only time that you don't. In some US states they do have strobe lights on top of the bus to draw the drivers attention in and note that there is in fact a school bus operating somewhere in their vicinity. So that's another way. All school buses in North America are yellow - pretty tough to miss a school bus. I mean unless you're really daydreaming.

But for the most part, know that they're going to be operating and there's a really good chance in the early morning before 8 o'clock and then in the afternoon after 2 o'clock between 2:00 and 5:00pm, and know that if you try to pass a school bus it's seen as a malicious action and that you're more or less guaranteed of being convicted in a court of law. And the penalties are really high - so don't!! And when you do stop for the bus, stay back if you're behind the bus. If you're in front, again stay back a fair distance. That way, the children have lots of room to get across the highway if they're crossing the roadway or the highway or whatnot - wherever that is.

Question from my smart drivers:

Check out all the videos here on the channel if you're working towards a license or starting your career as a truck or bus driver - lots of great information here. As well, head over to the Smart Drive Test website - awesome information over there and tremendous online courses that you can purchase. I'm Rick with Smart Drive Test. Thanks very much for watching. Good luck on your road test. And remember, pick the best answer, not necessarily the right answer. Have a great day. Bye now. 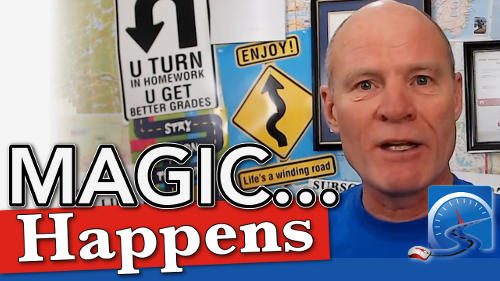