For the purposes of a road test, stay OFF painted islands.

Painted islands—as you can see here in the image— are two solid, often yellow lines, connected by hash marks.

Yellow lines indicate that they separate opposing lanes of traffic.

The purpose of these painted islands is to create a buffer of space between two opposing lanes of traffic as there is a transition.

And often that transition is two lanes traveling in one direction, which goes to third lane and that third lane becomes a left-hand turning lane as you can see here in the image.

And it's part of the engineering tier of traffic safety, which is the three tiers:

Now because it's yellow lines, you can't drive on it.

You got to think of it essentially as two solid yellow lines.

And in the driving manual on painted islands it says stay to the right and do not drive on.

If you think of a double solid line, separating two opposing lanes of traffic can't pass, can't cross over that. 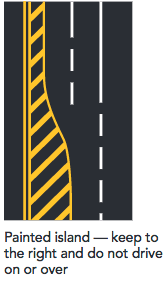 Turning Left On a Road Test

Where you're going to get into trouble on a road test is that the left-hand turning lane is full of vehicles and the examiner has requested that you turn left.

You cannot drive on that painted island behind the left-hand turning vehicles to get out of the way of vehicles driving straight through in that left hand lane.

You have to stay in that left-hand lane until you're beyond the painted island.

And then drive into the turning lane.

So don't do that.

Think of the painted island as made of concrete...as made of raised curbs.

For the purposes of road test, don't drive on painted islands.

And these yellow painted islands are most often found preceding a left hand turn to create a buffer of space and increase safety at intersections.