Can You Clear the Intersection?

Only enter intersection if you can clear it!

This is a T-intersection here behind me.

You can see the truck sitting in the intersection.

Get Your "How to Pass Your Driver's Test First Time"

• FEAR :: Learn the correct skills, abilities, and techniques that are required to pass your driver's test;

• CONFUSION :: Cut through the conflicting and incorrect information;

• QUALIFIED :: Smart Drive Test has helped 1000s to pass their drivers' test...and we can help you!

If you're on a road test and don't think you can clear the intersection because there's traffic backed up on the other side of the intersection, stop in the correct stopping position - often before the stop line because you're often going to be on a major road.

If there's congestion that's going to prevent you from clearing the intersection.

So stop before the stop line, wait for the traffic to move forward--when the traffic moves forward, then proceed through the intersection.

One of the places that you're most likely going to get stuck is if you're behind a city transit bus.

Or that you're back far enough that you can drive around that bus and look for an opening.

So if you're behind the bus, get ready to move over to the left lane to get around the bus because they'll get you trapped there and you don't want to get trapped in the intersection behind the bus. 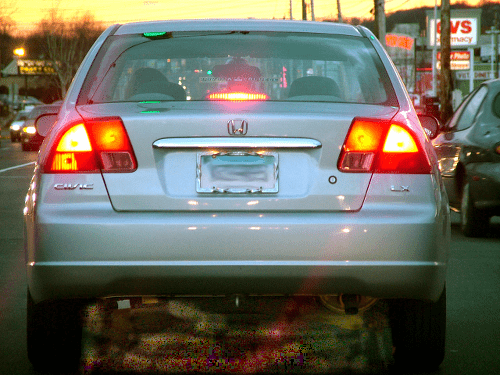 So for the purposes of a road test, don't block intersections.

If you're unsure, this one here is kind of a tricky one because it's a T-intersection into a main road.

If you're unsure go to a driving school get a driving instructor to do a mock test and show you where the route is and show you some of the difficult intersections that you might encounter.