The five components of a Class 1 driver training course are:

5) hooking and unhooking the trailer.

These are the major components of the course.The last two:

These abilities & skills are dependent on the License Center at which you will be assessed.

The first one, turning.

As I always tell my students - most of them are so consumed by trying to shift a non-synchromesh transmission, it takes all of their energy, all of their time that it overshadows the importance of turning.

And what I tell my students is, turning is gonna get you into trouble! It is going to get you hurt, your gonna pull the trailer up over somebody's car and they're going to be very excited when that happens!

Let me you, you pull the duals of that trailer up over the front end somebody's car on a left-hand turn - screaming, crying, jumping up and down - it is not a good scene.

Turning in my mind on a Class 1 driver training course is the most important aspect of the course and what you will learn.

Shifting, the second thing that you are going learn on a Class 1 driver training course.

Shifting is difficult because it is a non-synchromesh transmission.

And in that non-synchromesh transmission, it's up to the driver to synchronize the transmission.

and by doing that you have to match up:

Now the engine rpm is a misnomer because actually what you're doing is synchronizing the speed of the gears in the transmission.

But the only way that we have to determine how fast the gears in the transmissions are going is through the rpm, the tachometer on the dash.

In order to speed the gears up in the transmission you have to double clutch.

You have to reconnect the transmission to the motor and a lot of students have difficulty with the throttle and the clutch.

Those two things: ones on, one's off - wax on wax off! On that note, as well the clutch - if you push the clutch in too far after your starting gear, you begin to engage the clutch brake and slow the gears down in the transmission.

When you slow the gears down in the transmission you get a rough shift.

You also have to double clutch.

It's imperative that you double clutch - one clutch into neutral, let the clutch out, into gear again with the clutch in.

So you got a double-clutch.

This is not a spectator sport; you have to do it, you have to go to a school and have some one show you how to do it, it's going to make it a lot easier for you.

It's a complete, thorough pre-inspection.

You are not determining if the vehicle is safe, you're demonstrating a competency - that you know the names of the major components of the vehicle, what could be wrong with them, and whether they're working or not. 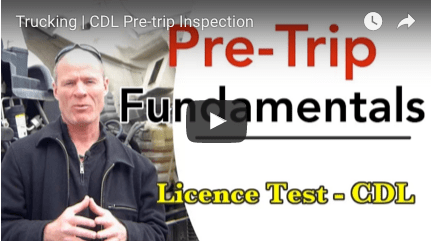 The last two components can be somewhat minor.

Backing - some places are just 50 feet straight back.

Here in Vernon, BC - thats what is, it's fifty feet straight back.

Make sure you get out before you back up.

For those people who don't have any experience at all backing up, go out get yourself a pickup truck, borrow somebody's utility trailer and just practice backing up.

All of the principles are the same as they are in a big truck.

Actually a tent trailer is a lot harder to back up than a semi-trailer.

You just need a bit more room with a semi-trailer.

Now just a couple of pointers on backing up:

Now don't let it get too far.

We say to students, look in the mirror - when you can see the dollies, then start to follow it.

2) To follow the trailer, you put your hand on the top of the steering wheel.

And the way the trailer's going is the way you turn the steering wheel.

So, a few pointers on backing - depending on the licensing centre - in Victoria, BC for example, it was quite difficult because the students had to parallel park and that was a bit of a challenge for some.

Now the last one is hooking & unhooking and I tell students it's not a huge deal as long as you don't drop the trailer on the ground, rip the dollies off, or pull the lines off, your OK.

Hooking up:  - public displays of affection:

Keep in mind, landing gear & dollies are the same thing.

They're the legs that hold the trailer up when it's not hooked to the truck.Those are the five components of a tractor-trailer course.

You're going to a driver training school and going to take a tractor-trailer course.

The five components are:

These will vary in difficulty depending on the licensing center.

Turning is the most important.

You need to get the truck around an urban area.

Some times what I tell students is driving truck is a little bit like being a soldier in the Vietnam War, or any war for that matter.

It's hours and hours of sheer boredom punctuated by a few moments of sheer terror.

Sometimes it's a bit of terror to get these things around a city because they're in spots they're not designed to be in.

The second one is shifting.

Shifting a non-synchromesh transmission is not a spectator sport.

You gotta get in the seat - you gotta do it.

You're going to learn by doing.

It's easier under the tutelage of somebody who knows how to do it, who can teach you how to do it.

So keep that in mind.

The other one is pre trip-inspection.

Once you've done it a few times it gets a lot easier.

The last two are the minor components I call them.

If you've had backing up experience before, it's going to be fairly straightforward.

It'll also depends on the licensing center and what are the requirements for backing up.Hook-unhook:

PDA‚”public displays of affection” for hooking up:

All the best at truck driving school; good luck on your CDL Driver's test!