Do you know how to protect yourself from being rear-ended in traffic? Watch the video!

How to Prevent being Rear-Ended in a Traffic :: Defensive Driving

Hi there smart drivers, Rick for Smart Drive Test talking to you today about skills and techniques that you could put in place to prevent yourself being rear-ended.

I was looking at Facebook last week and there was a campaign against distracted driving and the campaign showed this awful traffic crash of a lorry driver, a tractor trailer driving on the motorway in the UK, careening down the motorway and plowed into a line of queued up traffic that was waiting to exit the motorway.

It had been determined, because there was a camera in the cab of the truck, that the driver had been changing the music on his phone. 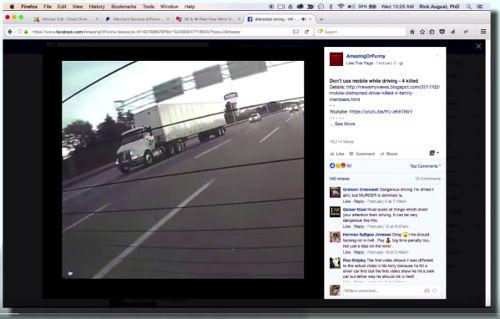 Video showing truck plowing into the back of queued up traffic on freeway, which promotes the dangers of distracted driving.

As well, it was caught on dash cam.

Somebody had a rear-facing dash cam and the lorry was careening down the motorway and didn't even see the line of queued traffic and didn't even apply the brakes and simply plowed into the back and four children were killed in the crash which as a parent myself and those of you who are parents, we realize that this makes us absolutely sick because we would do anything to protect our children.

A few years ago there was a video that we used to show in driver training courses called Sitting Duck and it was about the dangers of sitting along highways and sitting along freeways and one of the things that we teach new drivers for the purposes of a road test is one of the skills that you should keep with you for the remainder of your driving career and will help you to be not rear-ended when you're sitting in a queue or sitting in traffic.

So that's what we're going to talk to you today about skills and techniques that you can put in place to guard against being rear-ended. Stick around, we'll be right back with that information.

Hi there smart drivers, Rick for Smart Drive Test talking to you today about skills and strategies that you can put in place to prevent yourself being rear-ended.

Where to Stop In Traffic

One of the things that we teach new drivers for the purposes of taking a road test is that when they stop in traffic behind other vehicles they have to be able to see the tires of the vehicle in front of them making clear contact with the pavement, as you can see here in the image. 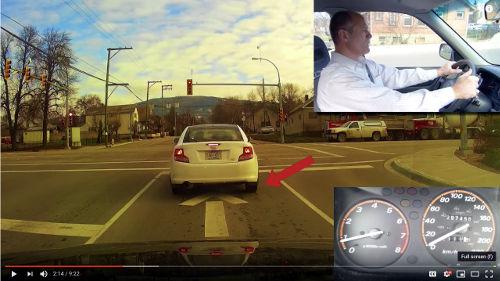 Stop in traffic so you can see the tires of the vehicle in front making clear contact with the road surface. This is excellent defensive posturing.

The reason that we teach them that is that that leaves about one vehicle length between you and the vehicle in front of you and there are many reasons why we do that.

Don't Back Up In Traffic

One of the most important reasons we do that is so that if the vehicle in front of you breaks down or the traffic becomes congested or you have to move you don't have to back up in traffic to get around that vehicle.

You can simply drive around that vehicle. That's one of the most prominent reasons why we teach new drivers that.

Now, I would encourage you if you've got your license and you are driving to put this skill back into place. Stay back from the vehicle when you stop in traffic.

If vehicles are approaching from the rear and they don't look to be slowing, tap your brake pedal or activate your 4-way flashers to indicate you are stopped.

Because if the vehicle's approaching from behind or not slowing down or stopping that space in front of you is often enough space that if you start moving forward and tapping your brakes to flash your brake lights or activate your four-way flashers that's going to get the attention of the vehicle behind you and oftentimes that space, that one vehicle space if you move up, that's enough for that vehicle, that driver behind you to get his or her vehicle stopped before they plow into the back end of you. 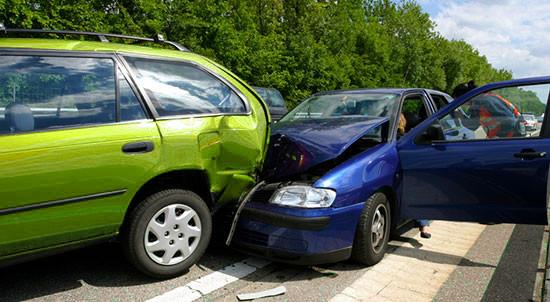 With the proper techniques you can prevent being rear-ended when sitting in traffic.

Now, if you're on the freeway and you see somebody coming up behind you in the mirrors and they're not slowing down, you can simply drive out and around the vehicle and get out of the way and you're probably not going to be rear-ended.

So it's a very good technique to continue to keep in place after you get your license.

Stopped on the Freeway, Motorway, or Interstate

Now, if you're stopped on a freeway and I have been stopped on freeways and highways and motorways and interstates, if there's a queue of traffic and it is congested and you come up, stay back a fair distance. I would even three, four, maybe five car lengths stay back and activate your four-way flashers.

Especially stopped vehicles on freeways where vehicles are traveling at high speeds, you need to get the attention of the vehicles behind you and indicate to them that you are coming to a stop on a high-speed freeway highway or interstate. So that is one of the ways that you can prevent yourself being rear-ended.

And when you're sitting in traffic, if you're on a highway or some other place like this awful incident in the UK, be on high alert. If you're anywhere on a freeway, sitting on the side of the road, you're in a queue, you're behind stopped traffic and congestion and there isn't any vehicles, there aren't any vehicles behind you, be on high alert because you are in a precarious situation there and unfortunately sometimes this happens and there's awful stories and many stories that I've heard of crashes over the years.

Emergency Vehicles Are Not Immune

One of the most prominent ones was some years ago on the 401 which is a freeway that runs east/west through Ontario, the province of Ontario here in Canada, there was a police officer that had a tractor trailer unit pulled over on the side of the freeway. 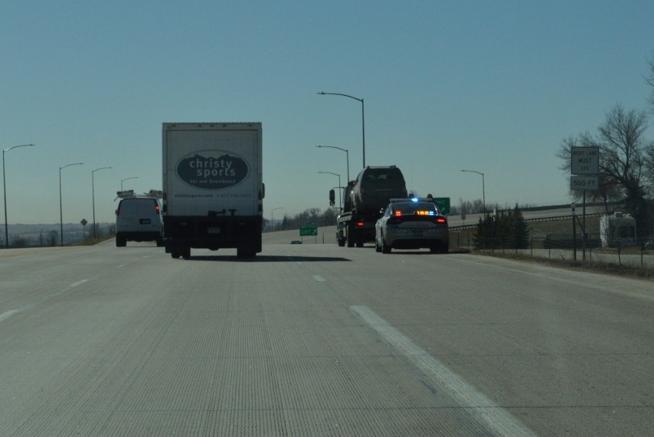 Emergency vehicles are in a dangerous position when pulling vehicles over on the side of the roadway. Thus the implementation of the "Move Over" laws!

So any time that you're on an interstate, a freeway, a motorway and you're stopped, be very afraid - be on very high alert because you are in a dangerous position.

We teach new drivers to stay back one vehicle length. We stop in traffic so that you can see the tires of the vehicle in front of you making clear contact with the pavement.

That way you've got enough room. If you're in back of the queue, whether you're on a freeway or you're in town or wherever, you should always be looking in that rear view mirror, the center mirror up at the front and your two wing mirrors to make sure that the traffic coming up behind you is stopped. 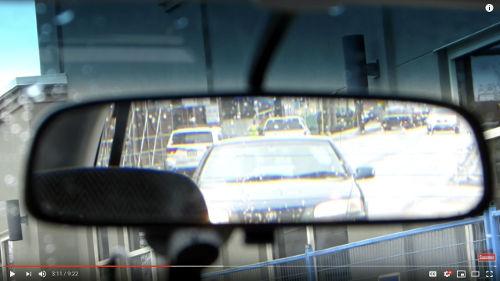 When sitting in traffic and there aren't any vehicles behind, ensure that you are watching the rear-view mirror to see that approaching vehicles are coming to a stop.

Get on the horn, drive around the traffic, drive into the ditch, do whatever you need to do to get your vehicle out of the path of that vehicle. Because if they hit you straight on, they're going to plow you straight forward.

If A Crash Is Imminent - get off on an angle

If you get the vehicle onto a bit of an angle or whatnot you're going to decrease the amount of impact and you may survive the crash whereas if you are plowed straight into, you're probably not going to survive the crash.

So try and get your vehicle off somehow anywhere that you can reduce the head-on impact of vehicles coming up behind you.

And if you are in the queue and you see he vehicle coming up behind you and you know that vehicle isn't going to stop, the vehicles in front of you need to be warned too so that everybody can move forward.

Pulling over on the side of the road should only be done in extreme emergency situations.

Moving Off Together - Reducing Congestion

And lastly, just as an aside, if everybody stayed back one vehicle length at the intersection with the traffic, all the traffic could move off together, whereas when they are right close together, you have to sorta stop and start to sorta move off and the traffic doesn't move off from the light as fast as possible.

So that's another benefit of staying back one vehicle length. 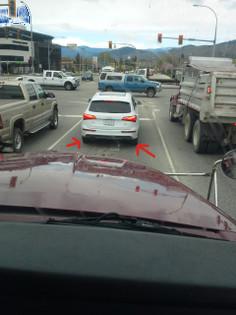 Stopping in traffic so you can see the tires of the vehicle in front making clear contact with the road surface works for every vehicle, no matter how big.

Question for my smart drivers

Have you been rear-ended? What was your experience of being rear-ended in a traffic crash?

Leave a comment down in the comments section there. All that helps out the new drivers with their license, learning how to drive, and be defensive and protect themselves when driving their vehicle.

Check out all the videos here on the channel. If you're working towards a license or starting your career as a truck or bus driver, lots of great information here.

As well, head over to the website. You can find great information over there and online courses that you can purchase.

It's a manual to get your CDL air brakes and fulfill that requirement for earning your CDL license. 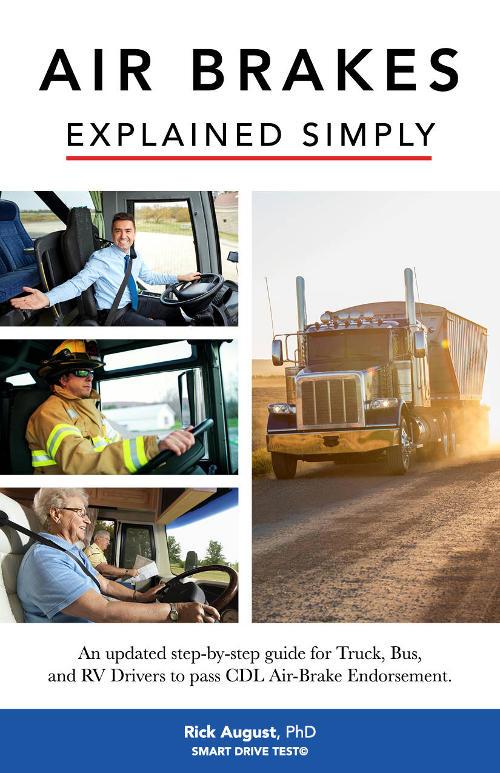 Good luck on your road test and remember, pick the best answer not necessarily the right answer. Have a great day, bye now.