American rules for log books are: 11 hours driving; 30 minute break at or before the 8 hrs after your last 10 consecutive hour off-duty period; workday occurs within 14 hour window.

You have to drive and work within a 14-hour window. You're allowed to drive a maximum of eleven hours, and you have to have a 10 consecutive hour break off in the United States of America. As well, during your workday from the last off-duty sleeper berth period of your 10 consecutive hours, you have to have a half-hour break at the eight hour mark. So for example, if you come on duty eight o'clock in the morning, you have to have a break at or before four o'clock in the afternoon. So we're gonna give you more details about CDL logbooks. Stick around, we'll be right back with that information. [OPENING CREDITS & MUSCI] 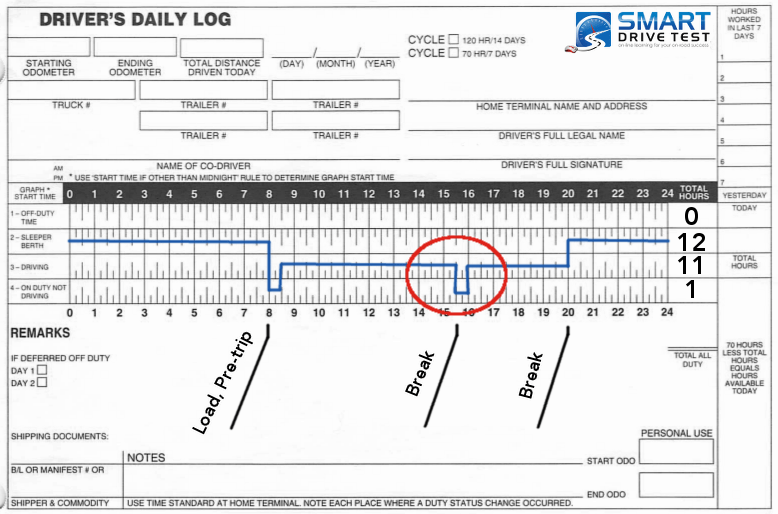 You have to have your workday within a 14-hour window. Not that kind of window! A 14-hour window - from the time that you start in the morning until the time that you take your 10 consecutive hours off-duty has to be 14 hours. So if you start at eight o'clock in the morning, you have to finish by ten o'clock at night. You cannot drive after ten o'clock at night. You can work after that, but you can't drive.

So you're 14-hour window has to be your 11 hours of driving time. You're allowed a maximum of eleven hours of driving time in the United States of America and at the eight hour mark, from your last off-duty time you have to take a 30-minute break. So for example, if you start driving at eight o'clock in the morning you have to take a 30-minute break at or before four o'clock in the afternoon.And as well, you have to have 10 consecutive hours off-duty. So for example, if you are off duty at eight o'clock at night you cannot drive again until 6am the next morning. You have to take 10 hours off-duty consecutive.

And make sure that you know the basic rules before you start applying the exemptions - those other rules that apply to log books in the United States. Because there are some exemptions and there are some differences between map miles and air miles and I would get the fundamentals of logbooks underneath your belt before you start applying those exemptions. As well, if you're keeping electronic logbook, as you will most likely in this day and age. because it's very unlikely the most companies are running paper logs. It's just too much work for the administration.

So for example, if you got fuel at ten o'clock in the morning, that receipt for fuel has a date and time stamp on it. And that date and time stamp on the fuel receipt also has to match up on your logbook. So make sure that you are on duty, not driving line and you are putting fuel in the truck and that's the notation that you put in your log book at ten o'clock in the morning if you have a fuel receipt that also has that. So if you're running log books, make sure that you're supporting documentation lines up with what's on your logbook and lines up exactly.

And on that note, I did have CVSE officer here in the province of British Columbia who said that hit he also liked to see receipts for cups of coffee - I mean you don't have to give that to the diesel bears, but it does support that your log book is in fact the true and filled out to the best of your ability. Because it is a legal document and if there is a crash, they will use your logbook to investigate that crash. So make sure that you fill it out to the best of your ability.

As well, if you're running for a company that doesn't operate 24/7, you can only run 60 hours in 7 days. And even if you're working for a company that does in fact operate 24/7 you can operate 70 hours in eight days. And as well, you have to hand your logbook in in the United States to your company every 13 days. Now just on that note of handing in log sheet - most companies - just for purposes of logistics and getting paid and accounting and those types of things, they want you to hand in your paperwork at the end of every trip.

So most drivers just keep the month with them. But most of you, as I said before, will be running electronic logbook, so you're going to have the required number of days with you in the vehicle. You only have to keep the supporting documentation for the current trip that you're on - you don't have to have supporting documentation for previous trips.

Supporting documentation - if they want that for previous trips, the authorities are going to go back to the company and request that from the company. So those are the basic rules in the United States.

Quick review of basic logbook rules in the United States of America. You're allowed to drive a maximum of eleven hours in your 14-hour window. So your workday has to occur within a 14-hour window. So therefore if you start working at eight o'clock in the morning, you can't drive after ten o'clock at nigh. Andt let me tell you, you probably don't want to drive anyway because you're going to be pretty beat up. As well, after coming on duty, after eight hours of working you have to take a break from your last of duty cycle.

So the two work cycles are 60 hours in seven days, which is a company that doesn't operate 24/7, which is not likely, but 60 hours in seven days if you're running a day cab. And the other work cycle is 70 hours in eight days and the company runs 24/ 7. And most of the time--I'm just going to tell you this--that drivers get into trouble because they violate the work cycle. So keep track of that, and there's another video up here on the channel - have a look at that and figure out how to calculate your work cycle if you're not using an electronic log.

And if you are using paper log sheets, as well you gotta hand in log sheets every 13 days minimum to your company. Most companies will want them handed in after every trip just for purposes of accounting and getting paid and those sorts of things. And finally, you only have to keep supporting documentation in the vehicle for the current trip. If they want the supporting documentation they'll go to your company to get that. Some of the basic rules in the United States. 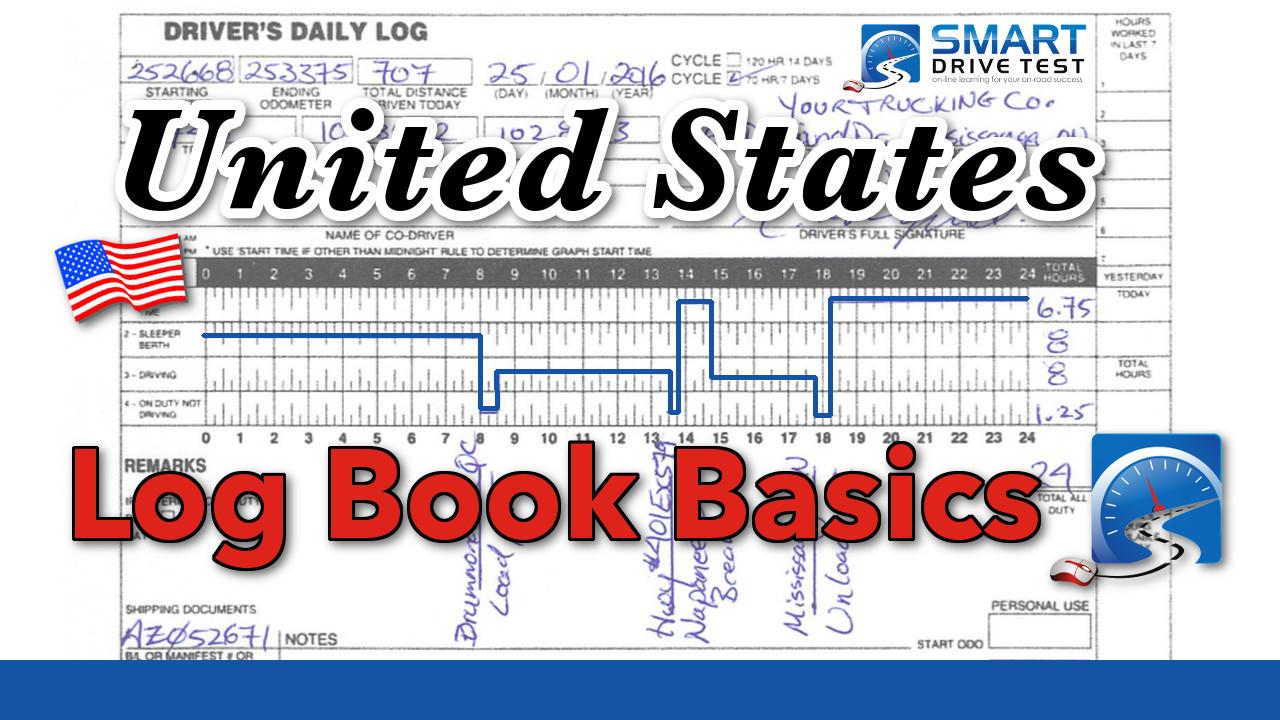 Leave a comment down in the comment section there, all that helps of the new drivers working towards getting their CDL license and starting their career as a truck or bus driver.

I'm Rick with Smart Drive Test. Thanks very much for watching. If you like what you see here share, subscribe, leave a comment down in the comment section. As well, hit that thumbs up button. Check out all the video here on the channel if you're working towards getting your license or starting a career as a truck or bus driver - lot of great information here. As well, head over website - lot of great information over there and online courses that you can purchase.

The American logbook course is over there. There's also a free log course that you can try out and if you like that then you can purchase the full course. The full course has all the videos and it has multiple choice questions and two great exercises that will help you to learn how to fill out a log sheet correctly. Thank you for watching. Good luck on your road test. And remember, pick the best answer not necessarily the right answer. Have a great day. Bye now. [BLOOPER] So if you don't secure the vehicle with parking brake before you ...[MAKING FUNNY NOISE WITH MOUTH] ...[MAKING MORE FUNNY NOISE WITH MOUTH]