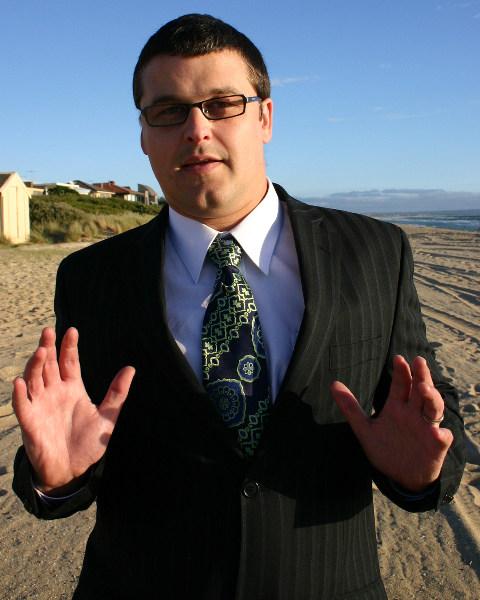 Just because someone in an authoritative organization said it, doesn’t mean it’s true

During my graduate work I learned many valuable skills, but one of the best was restrained scepticism about the reliability of facts and information.

If I had the least inkling of a doubt about the meaning of a word, I looked it up; otherwise, I suffered the wrath of my supervisor who was fierce about etymology (the meaning of words).

This need to accurate soon applied to all information and knowledge.

A couple of weeks ago, our company had a meeting of its driving instructors.

There, two pieces of information were relayed: the first fundamentally changed issues of compliance in the commercial driving industry; and the second potentially changed how we taught students the inner workings of air brakes.

2) Students were no longer to say that: “The push-rod and slack adjuster are at ‘about’ at 90° angle; therefore I know that the spring brakes are applied.”

Rather, the student was to say: “I know the spring brakes are applied because the push-rod is extended.”

The first point was invalid owing to its colossal ramifications; the entire commercial driving industry would have to be notified to make such as change.

And the outreach to stakeholders would require a substantial amount of time – probably one year at least.

As well, this type of change would not just affect the province of British Columbia, but would affect all of North America.

Moreover, no where in the legislation does it state that a driver has to note a post-trip on the pre-trip inspection form.

“(3) The inspection referred to in subsection

(2) shall be performed daily before the first trip of the day.” Require the section on recording the pre-trip

(6) The driver or the person specified under subsection(2) shall,

(a) at the end of the final trip of the day, or

At no place in the legislation does it say that a post-trip has to be noted on the pre-trip inspection, it states that “…and record in the trip inspection report defects observed…”.

I confirmed my knowledge with 2 CVSE officers at the eastbound Kamloops weigh station.

They confirmed that a driver is required to do a pre-trip inspection on her vehicle once every 24-hour period.

A post-trip is only marked on an inspection form if a defect is found while enroute or during the post-trip inspection.

The second bit of information supposedly came from a Kamloops ICBC employee.

The push-rod produces a linear motion (ie out and back); whereas the slack adjuster produces a rotary motion.

In other words, the slack-adjuster—like a wrench—goes around in a circle.

For linear motion to be effective on another component that goes around in a circle, it can only work in a small section of the rotary circle – approximately 20-45° degrees. 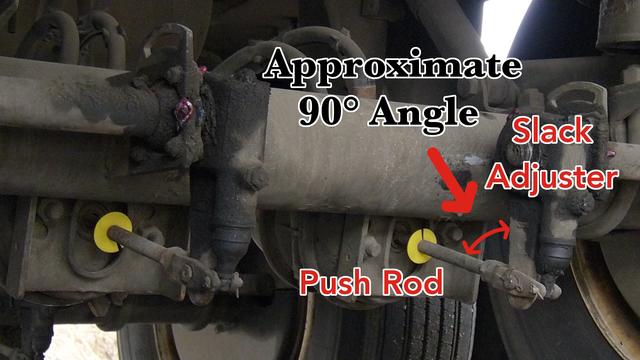 Think of how force direction on a wrench is changed as the nut moves.

Simple physics therefore, limits how far the slack adjuster can move for maximum efficiency of the air brake system.

And the approximate 90° angle formed by the push-rod and slack adjuster when the spring brakes are applied is a result of simple physics.

If the slack adjuster moves much past the 90° angle position, it begins to move in an upward direction.

If the slack adjuster moves up, the force against the brakes is no longer effective.

Consequently, this defect would increase the braking load on the other components in the system.

A Lug Wrench and Slack Adjuster Work the Same

When changing the tire on your car the wheel’s lug nuts have to be removed.

The lug wrench is placed on the nut so it is parallel to the ground – or at the approximate 180° or 9 o’clock position.

Downward pressure is applied on the wrench using your foot or hand.

This action is often effective in loosening the nut.

Once the lug wrench reaches the approximate 220° or 7 o’clock position however, downward pressure is no longer effective because the wrench begins to move in a different direction.

Consequently the direction of the force also has to be changed or the lug wrench’s position has to changed.

Like the lug, if the slack adjuster moves more than 10-15° past the 90° point, it is likely that either the brakes are out-of-adjustment, or the push-rod and slack adjuster have been incorrectly installed.

Finally, on page 144 of the Driving Commercial Vehicles manual it states: “Air brake chamber — air pressure applied….Note the position of the slack adjuster—it’s now at about a 90–degree angle to the pushrod.” 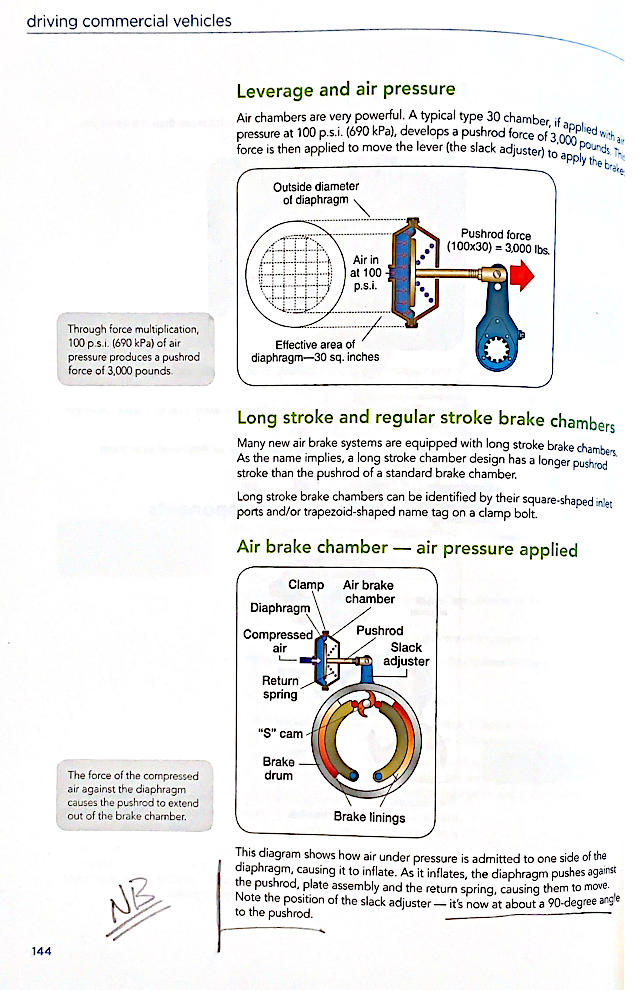 At an academic conference some years ago, a professor stated that most urban myths were started by academics (university professors).

Although not easily validated, my time as a professor leads me to believe that there might be some truth in that assertion.

Teachers, instructors and trainers have a responsibility to provide the most accurate information they can to their students.

Just because someone in a supposed position of authority said it, doesn’t necessarily mean it’s true.

If you have doubts about information provided, look it up.

If you can’t find the information, ask others.

And ask them to provide that information in writing.

Bureaucrats and authorities always, always write down information that has an impact on their stakeholders.

This process is part of their professional development; it prevents teachers from becoming stale.

If teachers allow themselves to become apathetic, we lose the ability to effect change in both our students and in our society. 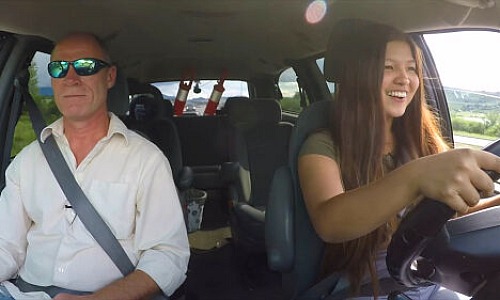 Be a smarter driving instructor with these 11 tips! 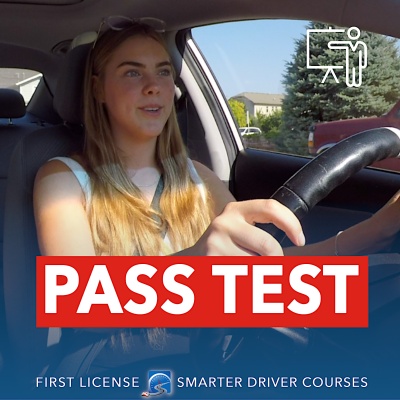 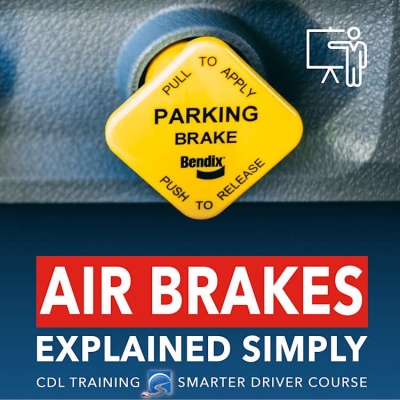 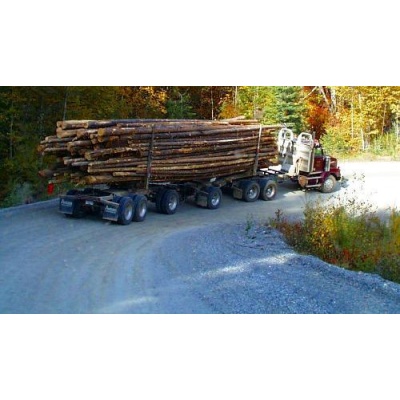