5 Defensive Driving Strategies To Be A Safer, Smarter Driver

Learn how to become a safer, smarter driver with these strategies.

- What is defensive driving?

Is it that I'm a good driver?

Because most drivers would agree with that statement regardless of where they live in the world, religion or politics.

Stick around, we're going to give you five defensive driving techniques that will make you a safer, smarter driver. 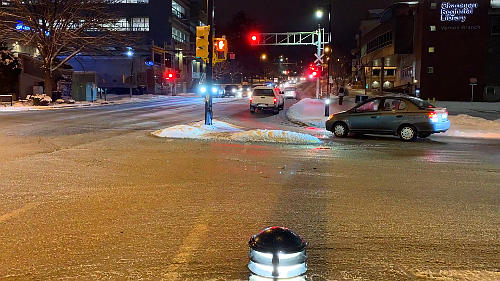 If you're not near anything, it's less likely that you're going to hit something.

The most important element of defensive driving is space management.

You need to manage space around your vehicle, to the sides, to the rear, and to the front.

And you can always, always manage space in front of your vehicle.

And I know there's drivers out there that will say to me:

"Oh, if I leave space in front, drivers will cut in."

Yes, they will, but if they're cutting in, they're going faster than you, and they will only be there for a couple of seconds and then you can reclaim your space. 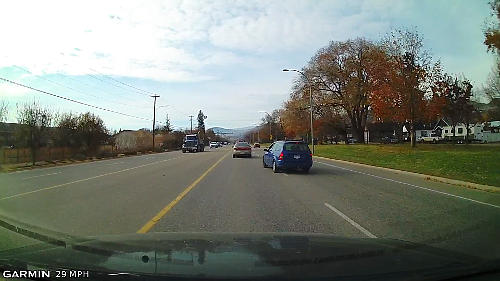 Always, always manage space in front of your vehicle, have your two to three-second following distance behind other traffic.

And when you're stopped in traffic, always stop so you can see the tires making clear contact with the pavement.

If you manage space well, you are rarely going to get into trouble when you're driving.

It is the most critical skill that you can have as a defensive driver, because the speed is going to take care of itself.

It's like right now, I have a two to three-second following distance in front of me behind this truck, and I'm simply doing 50 kilometers an hour which is the posted speed limit, or 30 miles an hour for those of you in the States. 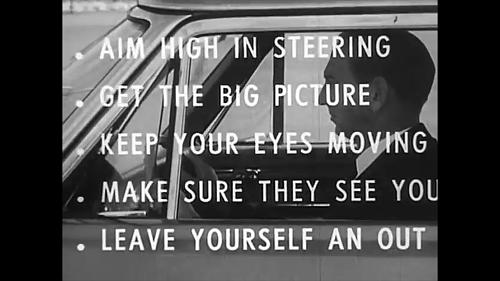 However, roads are much, much busier than they were in the 1940s when Smith founded that system.

So it's now more important that you manage space in front of your vehicle so that you can come to a stop and not get into trouble in case something happens in front of you. 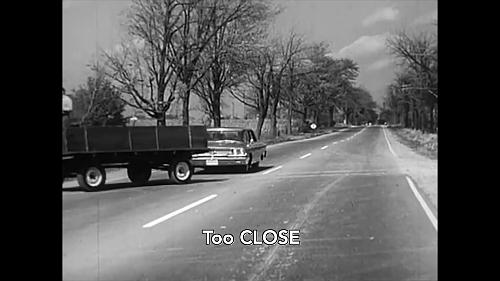 The definition of defensive driving is is that you are making allowances, you have skills and strategies in place that are compensating for the errors of other drivers.

And also for when you make mistakes because we all make mistakes when we're driving, we lose attention, we get distracted by something on the side of the road or we're looking at something or whatnot.

That's why it is so important to manage space around your vehicle, to allow for the mistakes of other people and for your own mistakes that you may make when you're driving.

So the most important element of defensive driving is managing space around your vehicle. 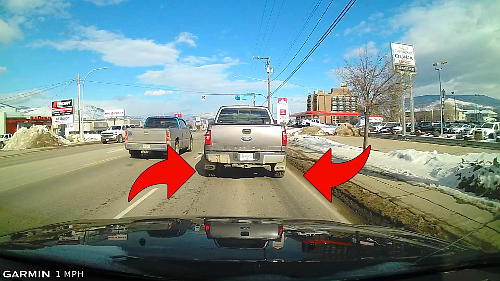 Where am I? What is it? Who is it? What's the weather outside doing? What's the outside temperature? Where am I at the intersection?

I have to do a little jig-jog here 'cause I can't see past the traffic, there we go.

I've got somebody stopped here at an alleyway.

So there's a lot going on and you need to be aware of everything that's going on.

And of course this vehicle in front of me didn't have the signal on, but was waiting to turn into the alley, I didn't know that, but I stay back, I relax, I don't get too close. 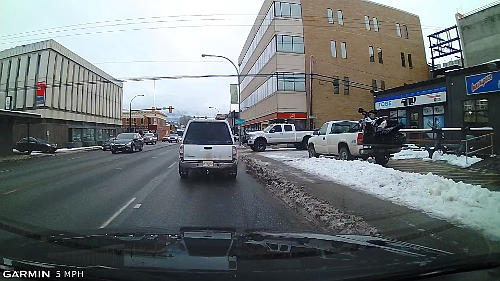 Again, even if that vehicle stopped mid-block, I still stop back so I can see the tires making clear contact with the payment.

That way I'm far enough away that I'm less likely to hit something.

So it's observation, but it's more than seeing, it's being aware of what's going on as you're moving through the intersections.

Tip number three is what I call MIT, mapping an intersection and tracking what's going on at the intersection. 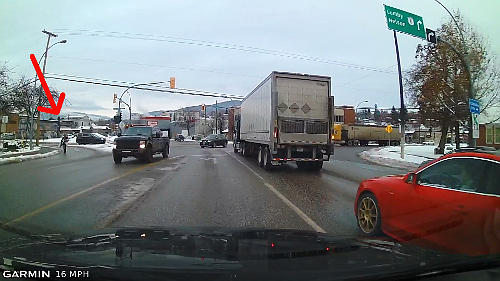 This dovetails well with situational awareness.

I got a cyclist over here, even in the wintertime we have cyclists riding around, so you have to be aware of that.

The pedestrian's gone, way up the sidewalk.

Cross traffic is going through. 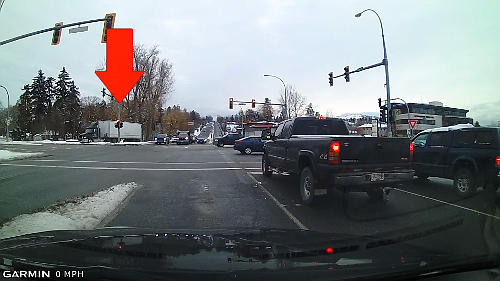 Traffic has stopped, there's nobody behind me.

So I'm watching traffic coming up behind me at the intersection.

Slip lane over there, I have a truck turning right, and I'm turning left.

So I'm watching and I'm tracking that truck.

The truck is gone.

I've got my advance green.

I'm tracking that car over there because it's turning right. 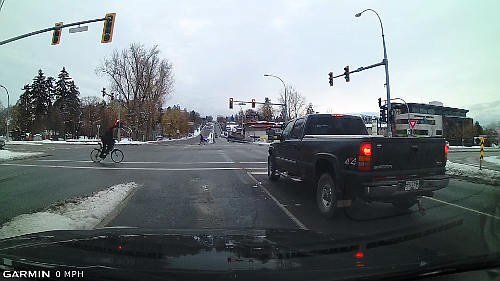 And of course the car is going to turn right in beside me.

So I was tracking that vehicle as I was coming around the corner through the intersection and making a left-hand turn.

Same thing here, I'm tracking the red car, moving up, the car's coming to a stop, pedestrian over here on my left, vehicles coming through, I'm stopping behind the stop line.

The pedestrian is gone.

Traffic is coming through.

I cannot see what's going on over there because there's a truck sitting beside me as you can see in the dash cam. 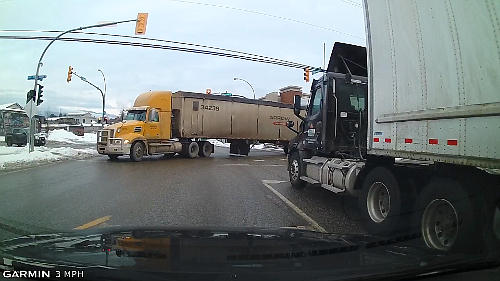 Especially those that are crossing your path of travel as you're going to move left through the intersection.

So, clear, the pedestrian is gone.

The vehicle has come through.

I'm clear to go, shoulder check, and proceed through on the left-hand turn.

Vehicles coming through, there's no road users at the intersection so I'm clear to go. 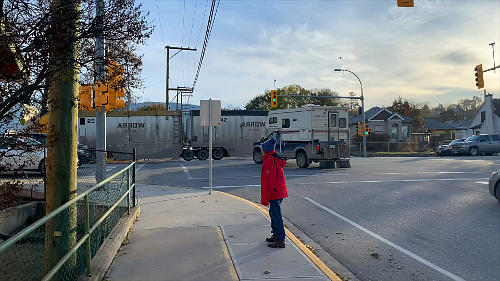 I don't have to slow down, I just have to map and track the intersect.

Especially those road users that are going to cross your path of travel because 40% of crashes occur at intersections.

I always have to park 400 miles away from the shop! 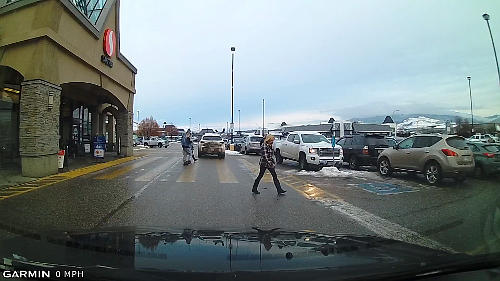 If you can find a space which you can drive through into the next space so that you can drive out when you're leaving the parking lot, that is ideal.

In parking lots, be sure that you go slow because there's lots of activity going on, especially this time of year with the holiday season and whatnot, track pedestrians, figure out where pedestrians are.

If you're the least bit unsure, simply stop and wait for them to pass your vehicle.

Most bingles, smashes and bashes happen in parking lots because people put the vehicle in motion and then they look, and by then it's too late.

Tip number five, and probably the most important tip, check yourself before you wreck yourself. 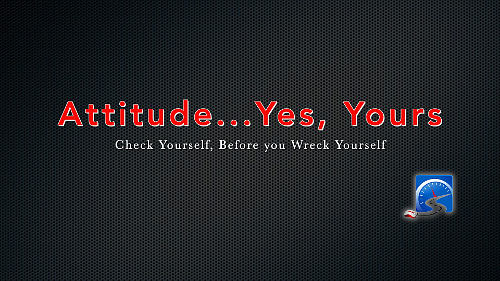 You have to have an attitude of defensive driving that, "I'm just going to let them go and have their crash somewhere else."

Because people are going to cut you off.

All of these things are going to happen when you're driving. 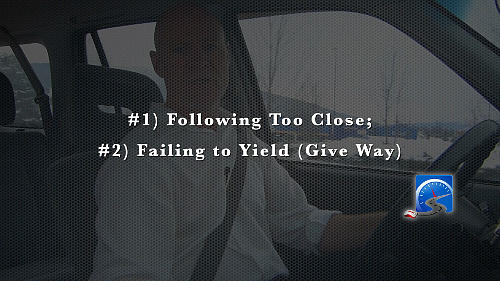 They are as predictable as that tomorrow we are going to get weather.

Because the top two reasons for traffic crashes are failing to yield and following too close.

Those two driving actions, failing to yield, failing to give way, and following too close, are simply attitudes about driving, it's your attitude towards driving.

And if you want to see the perfect film about Mr. Wheeler and Mr. Walker, a Disney character in the 1950s, that was about the very nature of the Jekyll and Hyde character that we become when we drive. 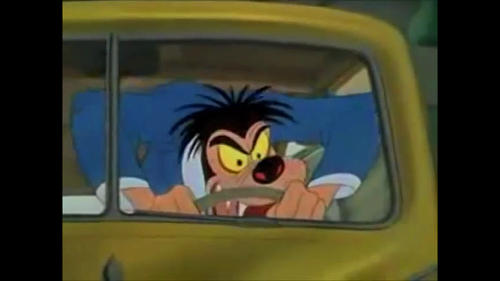 Have a look at that up in the corner, I'll put a card up there for you, they become this crazy creature, which is crazy, they follow too close, they fail to give the right of way and they believe that they have the right to go.

Have a great day, bye now 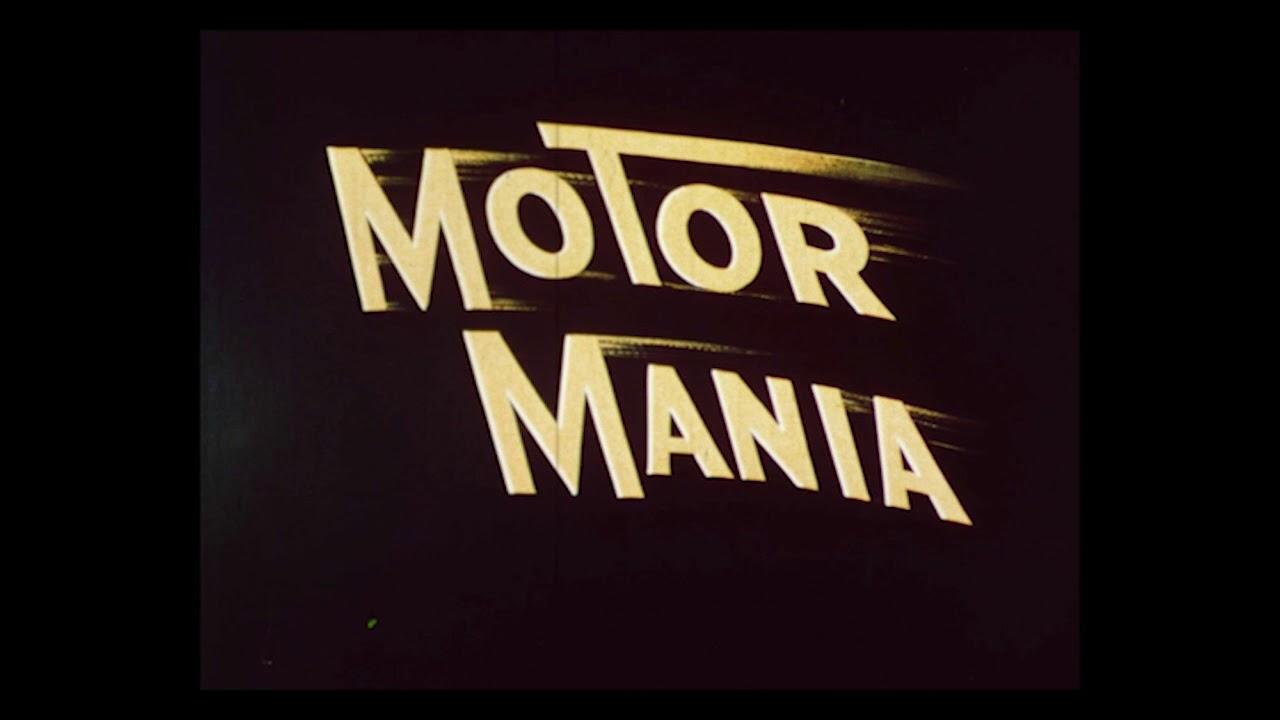 But once behind the wheel, a strange phenomenon takes place.

Mr. Walker is charged with an overwhelming sense of power.

Abruptly he becomes an uncontrollable monster, a demon driver.