Learn how to turn left OR proceed through an intersection and not crash.

Another video for crash analysis smart.

Today we're talking about left-hand turns, social cues, and "you can be right, or you can be dead right."

Now for those of you working towards a license or starting a career as a truck or a bus driver, be sure to hit that subscribe button.

That way you'll get access to all of the information and pass your road test first time.

As well, hit that bell.

Now you can see here in the video clip the vehicle is pushing its way through to make a left-hand turn at a very busy intersection.

The traffic on the outside lane has come to a stop.

The vehicle comes across and sits in the intersection in front of the outside lane of traffic.

The light changes to yellow and goes to red.

The driver thinks that the traffic is actually going to come to a stop-- incorrectly of course--and then proceeds through the intersection.

The other car runs the red light and the result is a collision.

Today we're talking about left-hand turns, social cues, and "you can be right, or you can be dead right".

Now we looked at the video clip in the introduction there and the vehicle was making a left-hand turn at a busy intersection.

Subsequently what happened was the vehicle ran the red light.

The vehicle other vehcile proceeded through and there was a crash.

Now you need to take social cues from traffic and one of the reasons that new drivers and some experienced drivers have crashes is because they fail to read correctly the social cues from other traffic, which could potentially result in a crash.

Social Cues from Other Traffic

And one of the social cues here is, when you're driving along multi-lane roadways and one lane of traffic or the other lane that you're not in slows down or comes to a stop you need to cover the brake you need to slow down--perhaps stop--and figure out why that lane of traffic is stopped.

What is the reason for that?

You can see here in the clip, I was driving the other day and the traffic in the outside lane came to a stop to allow the traffic in front of them to make a left-hand turn.

They were being courteous.

But for me driving it's a danger because the other line of traffic has come to a stop, and I came up and covered the brake after the vehicle in front of him made the left-hand turn.

I was cutting down my reaction time by covering the brake and ensuring what was going on in the intersection even though it wasn't a controlled intersection.

And I'll put a card up here for you on covering the brake.

That's an essential skill for passing a driver's test and remaining crash free.

Caught in the Intersection on a RED LIGHT

Now the other thing is that the driver making the left-hand turn--and we've talked about this before--for new drivers and veteran drivers alike, you get anxious when you're in the intersection and the light has gone to red.

You feel that you need to clear that intersection. 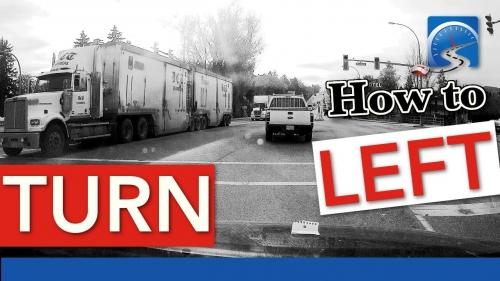 But let me reiterate once again:

Otherwise, as in the video clip here, vehicles could run the red light and you could be involved in a crash.

So know that if you're in the intersection and making a left-hand turn, do not go, do not proceed through that intersection until that oncoming traffic has come to a stop and you are absolutely sure.

You can be right, OR you can be DEAD Right

And finally, the last point is that "you can be right, or you can be dead right."

Yes the light went to red and the vehicle needed to make the left-hand turn and the other vehicle ran the red light.

But it takes two people to have a crash.

Had the person waited who making the left-hand turn until that vehicle came through and cleared the intersection, it would not have resulted in a crash.

Errors By Both Drivers

And the driver making the left-hand turn failed to ensure that traffic was coming to a complete stop before he or she cleared the intersection.

So that is the reason why there was a crash that resulted.

It was because both drivers made an error and subsequently there was a crash.

Have you been involved in a crash on a left-hand turn either when turning or proceeding straight through the intersection?

All of that helps out the new drivers and the experienced drivers as well who are working to upgrade their skills.

Check out all the videos here on the channel if you're working towards a license or starting your career as a truck or bus driver.

More great information over there and online courses that you can purchase.

All the courses are guaranteed PASS your road tests first-time or sixty day money-back guarantee.

For those of you working towards your first licensed PASS your road test first-time.

Look down in the description there, there's a 30% discount coupon.

Plug that into the coupon box over at the Smart Drive Test website, you'll pick up the course for about 20 bucks.