Overhead clearances must be considered by bus, truck & RV drivers. The maximum height of a vehicle in Canada is 4.15m and in the United States is 13' 6".

Something that people driving larger vehicles are prone to striking and in a recent camping trip there was a building, as you can see in the photo here of a building and the corner of it had been struck by somebody with an RV trailer obviously. The building kinda sat at an odd angle but the the soffit overhung the roadway and if people were not careful and didn't see the obstruction, they were going to run into it.

So one of the key points of overhead obstructions is that stay away from trees and buildings: they like to take bites out of vehicles.

And just give you two examples in the time that I was driving commercial vehicles I had to altercations - both minor. But still struck overhead obstructions. One of them was a at a loading dock in Florida. The dock itself was kind of inside the building and there was a roll-up door. Well, when I went back to open the doors at the back the trailer, I didn't realize that somebody had pushed the door all the way up. And it was down about a foot, so when I'm back in obviou

sly struck the overhead door and the shipper wrote on my bills of lading that I had struck the door that it was my responsibility. So I as the driver had been held responsible for the door being struck. 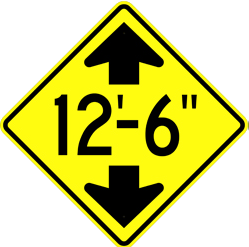 Another incident: I was hauling garbage and the the garbage was very dry, and on the transfer trucks that came out of Toronto they loaded the trucks to maximum weight capacity which was about 35 tonnes. You pulled on the scale and the trailer wasn't loaded, they backed you back in and they proceeded to with large excavator hammer on as much garbage as they could to get you to maximum weight. What I didn't notice when I pulled the tarp over the load was that it was sticking up five or six inches. I went under an underpass in Michigan that was exactly thirteen feet 6 inches probably like two or three inches of clearance. It pulled the entire tarp off the back of the trailer and some of the garbage blew off because it was couple miles down the road to the garbage dump. It's gonna happen!

Maximum Height of Your Vehcile

If you're driving professionally you're going to get into trouble and hopefully it's a minor incident not a major incident. Professional drivers need to know their vehicles or 4.15 meters or thirteen feet six inches in the States. Read the road signs. If you're on minor roads are in suburban areas and there's an overpass, make sure that you know exactly what the height of your vehicle is. For recreational drivers and Uhaul drivers Uhaul is very good about labeling inside the vehicle what the exact height of the vehicle is.

Recreational drivers, on the other hand, do not know what the height of their vehicle is and it's imperative that you take the time and measure it. Most of the time for recreational drivers, you're going to get into trouble in gas stations, refilling station. The canopies - nine times out of ten they're going to be enough clearance because in the last couple of decades these have all been renovated and raised up because the people with larger RV trailers getting in there. Again the story I opened with - be careful in campsites.

Never trust a GPS (Global Positioning Satellite) unit even if it's a commercial unit. Use your eyes. As Malcolm Reynolds says in the movie "Serenity": "you wanna find somebody, use your eyes." It's the same thing if you are unclear that you're gonna fit under a bridge, overpass, or other clearance and you don't know for sure because you don't know the height of your vehicle or you don't know the height up the overhead clearance get out of your vehicle and look. And don't look standing next to the vehicle. You have to get back away from the vehicle a good distance to get a perspective of how high your vehicle is and how high the obstruction is. If the obstruction is down here you were definitely not gonna go under. Finally, if you find yourself in that situation where you have stopped, and traffic is backed up behind you and you can't get around, you can't get the vehicle turned around because there's not enough room you're gonna have to back up.

Often times people are very helpful. If you put your 4-ways on, back up slowly, they'll move out of the way, they'll accommodate you. Somebody with local knowledge will help you. They're very good about that, people love helping truck drivers.

One time in New York state, there was a bridge overpass my introduction to New York that measures from the center of the hub, as opposed to from the road surface. All the signs are labeled 12' 6", 12' 8" 13 feet. Well your vehicles is 13' 6", it's not gonna fit under there. I stopped at this bridge where I was given directions It said 12' 8". I'm not gonna fit under there. One of the locals came up and told me the trucks went under there all the time. It was very helpful. Of course I went very slowly under the bridge and of course I fit. The thing about New York State is that they still haven't rectified this problem of measuring from the center of the hub. So know that New York State is somewhat different. But again do not trust your GPS, do not trust the signs. If you're unsure stop, get out and look. And in dire cases where you can't get backed up and traffic will not help you out, call the police. That's what they're for: come out, stop traffic, move traffic around, and get backed up.

Have a Plan to Get Around a Low Clearance

You try and do a U-turn, as in the video that I'm showing you here. Sometimes you can do more damage to your vehicle than if you just wait and think about what you're gonna do logically. OK, overhead obstructions and clearances: know the height of your vehicle 13 feet six inches 13 feet six inches in the US; 4.15 meters in Canada. Recreational vehicles: measure your vehicle. Know how high it is! Be careful at gas station canopies. Uhaul drivers, it's inside the truck; it's very well labeled how high that vehicle is. Do not bash the front of the vehicle in. Commercial drivers, recreational drivers, Uhaul rental vehicles. You know! Stop and look. Get out and look if you're the least bit unsure. And do not proceed - backup. Call the police. Have an action plan in place that will see you safe and other road users safe as well.