How to Brake Downhill Safely with a Large Vehicle

Technology and air brakes in the last 30-years has advanced to the point where air brakes are almost 100% bulletproof.

However, brake fade and driver error are the two weaknesses of the air brake equipped vehicle.

And just about any braking system suffers from the weakness of brake fade if you hold the brakes on long enough during a downhill descent.

This applies mostly to buses, mostly to trucks, some RV drivers, and people pulling RV trailers - heavier vehicles that need to get down the hill safely.

The first thing you need to understand is the grade signs.

The grade signs are listed in percentage of rise over run.

For example, if it's a six percent grade, that means that for every kilometre that you travel forward, the hill is going to drop vertically 60 metres (6'ft for every 100'ft forward) — the higher the percentage, the steeper the grade!

The next thing you need to know about grade signs is if the grade sign is less than a kilometer, most of the time‚ and I say this with some warning‚ most of the time it will not have a distance sign underneath it.

So there's no distance sign, it is less than a kilometer, however, I say that with some caution because there are hills in British Columbia that have grade signs, no distance signs, but they're far greater than 1 kilometer.

So know the hill, err on the side of caution if you don't know where you're going and having been down that hill before.

If the hill is less than a mile (1km)  in length and less than 10%, use your service and engine brake! It usually isn't necessary to gear down.

We're standing here at the Hamilton Hill, 10 kilometers above Merritt, BC.

It's a six percent grade for 10 kilometers; 6 percent for those of you who don't know, it drops sixty meters for every one kilometre you go forward (6'ft for every 100'ft forward).

It's a big hill, there's a big arrester bed at the bottom for those trucks that might run away.

In all the manuals it says to go down the hill in one gear lower than what you went up the hill.

You Don't Always Go Up A Hill to Go Down

That advice doesn't work very well in British Columbia or other moutainous areas because many hills, you don't go up a hill before you go down a hill.

If you're running heavier than a tandem-tandem, or you got dual digits, go down into fourth, Jake brake on.

Most trucks today are 13- or 18-speed transmissions.

Automatics are beginning to make some inroads into the industry, but for the most part most of the trucks that you will be driving are 13- or 13-speeds. 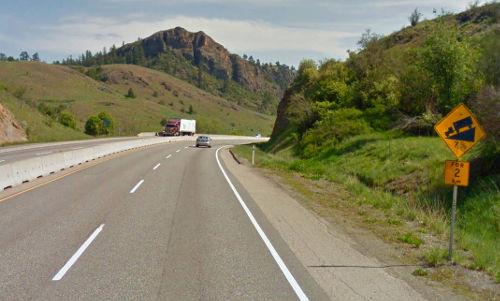 And I use this as a basis for teaching people how to drive down hill.

Jake brakes are designed to provide maximum braking capability at high RPMs‚ between 15 and 1900 rpm.

The next heavier vehicle‚ anything heavier than tandem-tandem, anything over 10% you probably want to be down in fourth 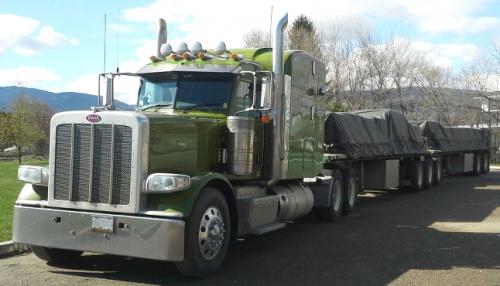 However, if you're in a gear and it's not quite right and it's not holding going down the hill and you do have to apply the brakes, apply what is called snubbing.

In the introduction I talked to you about brake fade... 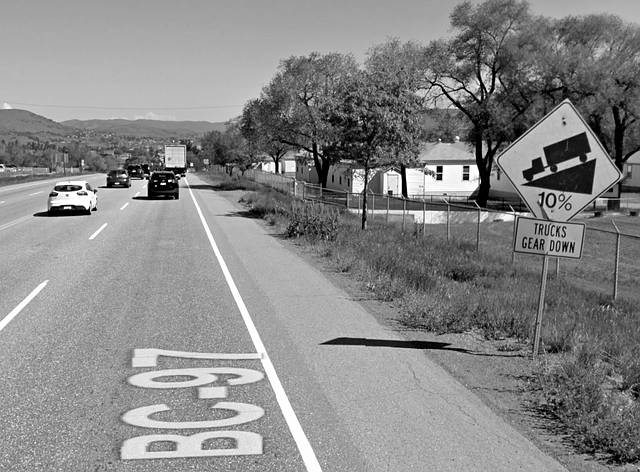 Brake fade is when you heat the brakes up too much.

The drums expand away from the shoes and the shoes will not come in contact with the drums and therefore you do not have braking power.

As well, if you heat them up too much, smoke, fire, and leprechauns with marshmallows chasing you down the road trying to have a weenie roast.

So don't let the brakes heat up! If you get in the right gear, you're going down the hill, you got your Jake brake on, your not gonna heat the brakes up.

It's a six percent grade, it's a big hill.

There's an arrester bed at the bottom for those trucks that run away or lose their brakes for whatever reason.

In this day and age, there's is no reason to be losing your brakes.

If you get in the right gear to go down the hill, you're gonna be set and you're going to be fine.

You won't even have to use the brakes.

The Jake brakes are very effective in holding the truck back and holding it to go down hill.