"Not So Fast": Book Review 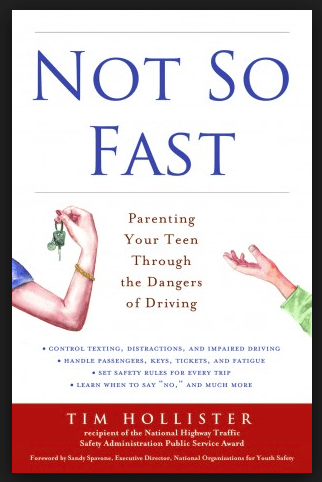 No parent should have to bury their child.

First and foremost, this is a book written from a place of deep pain, inexplicable grief, and enduring loss. In early-December 2006, Tim Hollister’s son Reid drove home on a Connecticut, USA freeway at night. The road was wet from a prior rain. Speeding into a curve, Reid realized too late he was in peril. The car spun out of control. It struck a guardrail at its weakest point – the mid-point of the driver’s door.[1] That night Mr. Hollister’s 17-year-old son was killed in a single-vehicle collision. That event led to his successful blog and this book. Like Candy Lightner whose 13-year-old daughter was killed by a drunk driver and founded MADD (Mothers Against Drunk Driving) in 1980, this work serves as a catharsis.

The book has merit, and I would recommend to parents of learning and novice teen drivers to invest an afternoon.

Hollister claims that, “it [the book] contains almost nothing about how to teach a teen to drive a car. My exclusive focus is helping parents make informed decisions about whether, when and how their teens should drive in the first place, both initially and day to day” (p. 3). Although helping parents is the purpose of the book, this is not its thesis, or main point. In Chapter 6, he writes, “Parents should determine how strict their own state’s GDL [Graduated Driver’s Licence] program is, because the stricter a state’s law, the more help a parent has in controlling a teen driver, and the more lenient a state’s law, the more responsibility the parent has to impose rules over and above the state’s” (p. 28). In other words, as Hollister argues throughout the book, tougher rules and laws will reduce teen crashes. And in the immediate aftermath of his tragic loss, Hollister served on a Connecticut state taskforce that brought about tougher laws for its GDL program.[2] The thesis is not surprising owing to his background as a land use and environmental lawyer.

Graduated Licencing Programs began in 1987 with New Zealand implementing the first, which created a snowball effect. By the turn of the 21st century, most industrialized states and provinces implemented GDLs. The program implemented a two-phase component for new drivers attaining a licence: the Learner’s and Novice Phase. The four restrictions:

have proven to reduce the risk of learning to drive for new drivers; however, the combination of these restrictions remains uncertain. In keeping with the GDL programs, Hollister also puts forward the distracted driving argument and rehashes the fact that young people’s brains don’t fully develop until their early- to mid-twenties. Both facts are relevant, but nowhere in his book does he acknowledge the fact that driving is dangerous for all road users, not just teens. Also, senior drivers on a 100,000km driven have similar crash rates to teenage drivers.

As a political group, teen drivers are an easy target group with which to impose sanctions, rules and laws. Unlike senior drivers they have minimal political clout: they possess little understanding of the system, and have neither the time nor the resources to affect political change. Senior drivers, on the other hand, have all these in addition to being the leaders in positions of power, thus making them a formidable opponent.

Hollister indicates that driving and navigation some times bring teen drivers onto unfamiliar roadways. Navigation is no doubt a distraction, and nowhere in our current driver education system do we teach drivers how to route plan and navigate. This persistent problem amongst all drivers, not just teens, is a limiting factor of driving as a social activity.

are symptomatic of the driving population at large. As a commercial driving instructor (buses & transport trucks), time and again, I identify these as the persistent problems of upgrading drivers.

Hollister’s advocation that parents assist with the route planning is prudent in light of the fact that recreational driving and teen drivers that have access to their own vehicle are at a higher risk. And increased control should be accompanied with a ceremony of keys every single time the novice driver leaves the house. In combination with recreational driving, teens have higher crash rates in the summer (p. 20); but again so do all drivers. Most believe that winter sees the most traffic crashes, when in reality the highest number of collisions in North America occur in the summer months. As well, he advocates that after-school drivers too are at higher risk. These behaviours, Hollister believes, should be controlled by the parents, similar to the task of an air traffic controller. This analogy plagues traffic safety and is a tired one. There is absolutely no comparison between the driver of a motor-vehicle and a train’s engineer, a ship’s captain or a plane’s pilot. Trains, planes and ships operate on prescribed routes, with support workers, and often no fewer than a dozen personnel directly responsible for the logistics of that vessel. Motorists, on the other hand, are solo, and some times make perilous decisions in a split moment. Parents providing active support roles for teen drivers is positive, but this action starts much earlier in the parent-offspring relationship.

Unfortunately, the elevated level of control advocated in Not So Fast ignores the broader social, cultural and political milieu into which driving fits. Cell phone & GPS (Global Positioning Satellite) use and texting, for example, are not just a problem of teen drivers. A 2011 study by the Centre for Disease Control in United States, revealed that 66% of Americans talked on a hands-held cellular device while driving; 33%—100 million motorists—admitted to texting while driving in the previous 90 days.[4]

For teens, the “3Ds” of life culminate at the confluence of adulthood.

Ideas such as lowering the legal drinking age are seen as radical, and consequently shunned.[5] Like the campaign of distracted driving, teen driving cannot be isolated and studied independently of its broader context. Driving is such an integral part of our society that authorities must have a holistic approach when identifying ideas, problems and solutions. Consequently, Not So Fast’s failure to put the issue of teen driver into a broader contexts is one of its limiting factors.

At the beginning of the 21st century, most of the “G20” nations have finalized their rural-to-urban shift. This transition from country-to-city now brings teens to the task of driving with little, if any, prior driving experience. A quarter century earlier, most students came to the process of getting a licence with ample knowledge of how to operate a motor-vehicle. I myself drove lawn tractors, dirt bikes, snowmobiles, ole’ farm vehicles, and farm equipment before embarking on the task of earning a driver’s licence.

In tandem with this rural-to-urban shift, the comfort, ease of operation, and safety of personal vehicles has evolved to unimaginable heights. First, the automatic transmission, which is now prolific in vehicles, allows for a lower attention to the task of driving and contributes significantly to distracted driving. Next, power steering & brakes, increased safety features, and the overwhelming number of creature comforts elevate the "rebound effect".[6] Consequently, teens and all drivers feel safer, therefore most speed, follow too close, and often fail to yield, which oddly enough are the top reasons attributed to motor-vehicle collisions.

Finally, thrown into the mix is humanities’ optimism bias – the ideology that allows us to get out of bed every morning and carry on with the proverbial “eternal quest.” For teens and young people, a grasp is of mortality is simply beyond their comprehension. It is a barrier that cannot be peirced by their day-to-day reality. Consequently, how parents and society teach young people the dangers of driving occurs much earlier than when they step up to the plate of getting a licence.

In the final chapter, Hollister promotes “dobbing in” the unsafe actions of teen drivers to school authorities, police and parents. The chapter stops just short of suggesting a police state for teens. Yet, it raises broader questions of trust and the transition for teens into adulthood and their assuming greater responsibility. Teen driving and responsibility begin at birth. From a young age, parents and society teach children “road sense.” Directly or indirectly, parents teach their children about distracted driving, low-aim steering, navigation, how to read roads signs, but more important “risk mitigation”. If parents foster a responsible, trusting relationship with their children from the outset, than the ideas in Not So Fast will augment this relationship; if not, than neither this book nor any other thinking will mitigate the risks of teen driving.

[1] Passenger vehicle’s are weakest at the mid-point of the driver and passenger doors. These are also weak at the mid-point of the rear doors, but the rear doors are often smaller than the front, thus providing more strength and protection for vehicle occupants. This fact is one of the reasons that it is advocated that children sit in the rear of the vehicle. Even side-impact air bags provide minimal protection in a "T" bone collision (side impact) – especially if the colliding object strikes at an angle, thus concentrating the force of the crash.

[2] Another name for the Graduated Driver’s Licence is GLP: Graduate Licence Program.

[6] For a discussion of “rebound effect” and “optimism bias” as these relate to driving see: Rick Clapton, “Spinning Our Wheels: The inability of traffic policy to change driver behaviour.” 2006 Traffic [University of Melbourne’s Post-Graduate Journal], No. 8, 2006, 87–116.