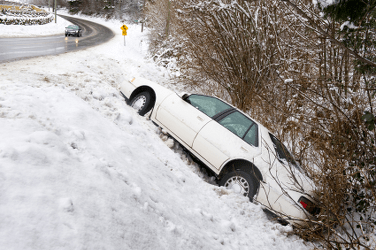 There is no such thing as black ice. Just because motorists can’t see the ice doesn’t mean it’s not there.

And just because an event is unforeseen, doesn’t mean that its not foreseeable. In other words, drivers know when there is ice on the road.

Any geographical area that allows the air around a roadway to cool is going to have moisture. This moisture or sheen of water is going to freeze when the night temperature falls below 5°C. Consequently, there will most likely be ice on less-travelled roads by early morning.

And a thin sheen of water is going to freeze faster than a large pool of water. A lake, for example, requires long exposure to subzero temperatures before it freezes. Yet, there will be a layer of ice on the top of mud puddles in the morning after a cool autumn night,.

As well, a lake—still water that is often only moved by the wind—will freeze before a river. Moving water will not freeze, unless exposed to tremendous cold. Likewise, roadways that have a lot of traffic causing the water to be moved around and displaced by the vehicle tires is less likely to have ice. On the other hand, a roadway with less traffic or no traffic at all and is low-lying or in the shadow of a mountain or hill is more likely to have ice.

The cold air surrounds the structure and any moisture on the road surface freezes faster, because none of the warm air from the daytime is contained. Consequently, when going across bridges, let off the throttle and allow the vehicle to freewheel. The same technique is used when going under overpasses. Know that there is likely ice, and use the same technique as going over a bridge.

Cold air is heavier than warm air; thus, depressions in the land, low-lying areas and swamps or marshlands are going to be colder than the land at higher elevations. It is therefore important for drivers to be conscious of the geography over which their vehicle is travelling. When descending down a hill, take note and know that there is likely going to be ice at the bottom of the hill, owing to the lower elevation.

In British Columbia’s Rocky or Quebec’s Appalachian Mountains, there are lots and lots of roadways that are in the lee of a mountain or hill. These geographical features block both the sun and wind thus causing colder temperatures than in the surrounding area. Deep valleys too, cause the sun to rise later and set earlier. The geographical features cause the cold air from the night to linger longer, and consequently create the ideal conditions for condensation and ice.

Areas of the roadway that are near bodies of water

Ice is more likely to form on roadways when these run parallel to a body of water. The air travelling over the body of water picks up moisture and drops it on the roadway. A perfect example of this effect is Monte Lake in British Columbia’s interior, approximately 47km east, southeast of Kamloops. On the west side of Highway 97 is Monte lake, and on east is a mountain that causes the roadway to be in shadow. Owing to the mountains on the west side of the lake, the winds are funneled through the valley from the north. Consequently, moisture is picked up form Monte Lake and dropped onto the roadway. For motorists that travel this section of roadway regularly, they know that when the thermometer drops below 5°C (41°F), there is most likely going to be ice in this vicinity of the roadway.

If your vehicle is not equipped with an outside thermometer, these can be purchased at a hardware or automotive store for less than $30.

When driving over bridges and underpasses, release the throttle to break tension to the drive wheels. Also, put both hands on the steering wheel, and avoid using either the accelerator or the brake. By allowing the vehicle to freewheel over the ice, it is unlikely that you will lose control of your vehicle. Importantly, never brake in a curve if you suspect there is ice. Slow down before the curve and gently power through the curve; you don’t need to be accelerating to put power to the drive wheels – just moderate throttle.

When braking on ice—and most vehicles are now automatic—put the gear selector in neutral. Most automatic transmissions gear selectors will stop at neutral. This winter driving technique takes a bit of practice, so if you are unfamiliar with putting the vehicles transmission into neutral before braking and coming to a stop, go to a controlled area where there is little or no traffic a practice.

For the less experienced drivers, braking and steering on ice or slippery conditions are separate actions. In other words, brake and slow the vehicle first before steering or going around a corner. If you attempt to brake and steer at the same time, as you do in the summer you will find that the vehicle will often continue in a straight line because the wheels are locked.

One of my pet peeves as a driving instructor is motorists stating that there was “black ice”. Just because you can’t see the ice doesn’t mean that the ice can’t be foreseen. There are many telltale signs that will indicate if ice is present. When you suspect there is ice at the road locations mentioned above, take note and drive accordingly.

A little bit of knowledge will tell you where ice is most likely to be on the roadway.