Air brake systems are unlikely to fail - watch the video.

Hi there smart drivers Rick with Smart Drive Test talking to you today about why air brakes won't fail. In the last decade, we have equipped vehicles that carry our most precious cargo with air brakes.

And if air brakes failed they wouldn't be on those vehicles.

In the last two decades improvements in technology and the increased numbers of fail-safes on air brakes have more or less made these bulletproof.

The only failing of an airbrake system in this day and age is brake fade, and drivers have to work pretty hard to experience brake fade on an airbrake equipped vehicle.

Stick around to the end of the video, and we'll tell you which vehicles carry our most precious cargo.

Hi there smart drivers, welcome back Rick with Smart Drive Test talking to you today about why air brakes won't fail.

As part of the requirement in both the United States and in Canada and other parts of the world, drivers have to take an airbrake course.

In those airbrake courses that were developed in the 1970s, many drivers are taught that air brakes are dangerous.

And that air brakes could potentially fail at any given time.

Unfortunately that is no longer true!

With advances in technology, modern air brake systems are more or less bulletproof.

And I would argue that the time has come for a revamp of all of these airbrake courses, because drivers do not need to know the technical inner workings of an airbrake system.

First failsafe of the airbrake system that will prevent it from failing are the air tanks themselves.

The air tanks on these systems are capable of holding enough air for 6 to 12 full brake applications.

So if the entire system shuts down, there's still enough volume of air in those air tanks to make 6 to 12 full brake applications and to stop a fully-loaded commercial vehicle equipped with air brakes.

You don't need a full brake application to bring the vehicle to a stop, so there's plenty of air in those tanks that if the compressor falls off the side of the motor or the whole system shuts down, there's still enough air to bring that vehicle to a stop.

The one-way check valves at the entrance to the primary and secondary systems are the next failsafe on the system.

These prevent air from bleeding out of the system in the event there is a system failure or a break in the line between the compressor and the air tanks.

So the air can only move one way through the system. It's unlikely, that if the compressor stops working or the main discharge line is broken, the air is going to bleed out of the system because of those one-way check valves which prevent the air from coming back through the system.

It only goes forward in the system.

The one-way check valves lead us into the next system and this system is found not only on air brake systems, but on your personal vehicle as well.

Even on a hydraulic system on your passenger vehicle, if you open the cover off of the master cylinder, you will see two chambers in there.

Since the late 1960s, all hydraulic braking systems have been divided into two independent subsystems - one for the front, and one for the rear.

An airbrake system is the same, it is divided it into two independent subsystems: the secondary, and the primary.

The secondary runs the steer axles and the primary runs everything behind the driver.

And it is the most prominent fail-safe system of an airbrake system, but there are more. 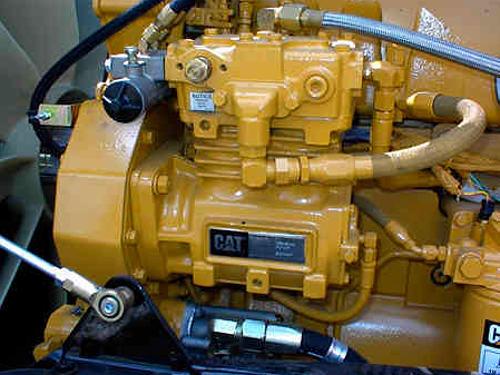 The air compressor is another failsafe on the system.

These air compressors pump more air than could possibly be required and we see that on modern air brake systems because the air compressor pumps enough air to run all of the air accessories on the vehicle, whether it's a bus or a truck.

And one of the most demanding systems that uses air pressure is the air-ride suspension, because unlike a passenger vehicle that has airbags and it is just a balloon that you pump up and it just pushes down like as if you were going to squish a balloon.

On a tractor trailer or a bus there is air constantly being evacuated out of the airbag system when it goes over a bump, it actually releases some of the air and then it fills back up.

The compressor is constantly pumping air to fill that air ride suspension.

As well as other accessories on the vehicle: air ride seats, or in the rare case of windshield wipers, gear selectors and those types of things.

The air pressure is used for a lot of other accessories, so the air compressor is another failsafe on the airbrake system because it can supply enough air to not only run the air brakes, but all of the accessories on the vehicle.

The next failsafe--saying that about air accessories on the vehicle--there is a pressure protection valve on the system.

So what happens is, if the system pressure starts to drop between 60 and 90 pounds (psi - pounds per square inch) the pressure protection valve will shut off air to the accessories and direct air just into the air brakes.

So that's another failsafe, is the pressure protection valve which redirects air from the accessories into the air brakes if there's a loss of air pressure between 60 and 90 pounds. And it varies a little bit depending on what vehicle you're operating.

One of the most prominent fail-safes on a modern airbrake system is the low air warning device.

And in this day and age, they're all a light and a buzzer - so they're audible and they're visual - you can see it and hear it. And the low air warning is pretty annoying - it's that, you know, most annoying sound in the world. [MAKING BUZZER SOUND & CHUCKLING]

That sound -we all know that sound! Man that's annoying!

So at 60 pounds the low air warning comes on.

And in keeping with the low air warning, all of the air pressure on an airbrake equipped vehicle is plumbed through the dash and even over the sound of all of the road noise, and the diesel engine, and people talking--if you're driving a bus, driving a truck--you can hear air leaks on that system.

So even a minor air leak is prominent and you will be able to hear it.

So that's another failsafe, is that the driver is actually paying attention to the vehicle and listening to what's going on and hearing air leaks in the system. 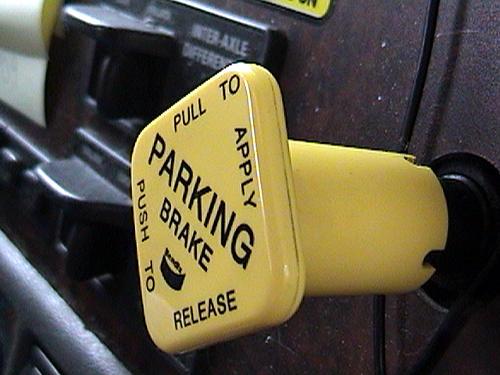 The most prominent failsafe on the airbrake system, next to the dual air brake system-- the division of the system into two independent subsystems--are the spring brakes.

And unlike the movie Terminator, which can see here in the clip when he rips the air tank off the bottom of the bus and they lose the brakes, that will never happen on a real airbrake system.

What happens is that you lose all the air pressure in the system, the springs expand, and engage the brakes.

So most of the time those spring brakes are used for parking, but in the event of a catastrophic air loss in the system, the spring brakes will engage and the vehicle will come to a screeching halt.

And oftentimes that happens between 20 and 45 pounds per square inch.

So if you're the driver and that low air warning comes on and you're not paying attention--and usually what I say to drivers is that you have to be sleeping, stoned, and really drunk not to hear that air loss or hear the low air warning and not know that it's going down between 20 and 45 psi.

Because if you don't pay attention, you are going to be doing a bug impression on the inside of the windshield because that vehicle is going to come to a screeching halt!

The next failsafe on a truck designed to pull trailers with air brakes is the tractor protection system.

1) the trailer air supply valve on the dash and

2) the tractor protection valve which is called the same thing as the track protection system just to confuse drivers when we're teaching it to them.

Anyway, the tractor protection valve in the back is kinda like the guard, it monitors air pressure into the trailer.

It's another failsafe on 18 wheelers and trucks designed to pull trailers equipped with air brakes.

[DRUMROLL] Drumroll... the last failing of an airbrake system was manual slack adjusters.

Manual slack adjusters had to be adjusted by the driver to keep air brake systems in adjustment and working properly.

And up until the mid-1990s and early 2000s, 75-80% of trucks during the annual blitz on the part of the CVSE (Commercial Vehicle Safety & Enforcement) the MTO (Ministry of Transportation of Ontario) and the DOT (Department of Transport) in the United States found that trucks were put out of service because brakes were out of adjustment. 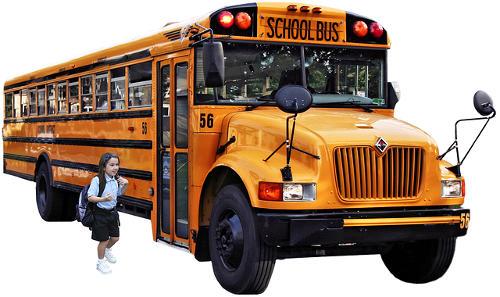 Automatic slack adjusters are reliable and work well to keep the brakes in adjustment.

And as I said, manual slack adjusters were the last failing of the airbrake system.

And essentially automatic slack adjusters are just a ratchet mechanism that when the brakes are applied it clicks over to the next ratchet position.

It's kind of like a boat ratchet.... click, click, click... and when the brakes wear and there's a certain amount of slack and the pushrod comes out of the brake chamber a certain distance, it will ratchet over to the next position and keep the brake adjustment.

And these are effective - quite effective actually. They've made air brakes almost more or less bulletproof.

It was the last hole in the air brake system that has now been corrected.

And finally, the "proof in the pudding" of why air brakes are more or less bulletproof in this day and age.

In the last five to ten years, school buses, that carry our most precious cargo, have all been fitted with air brakes. And air brakes are more or less bulletproof because they're on school buses.